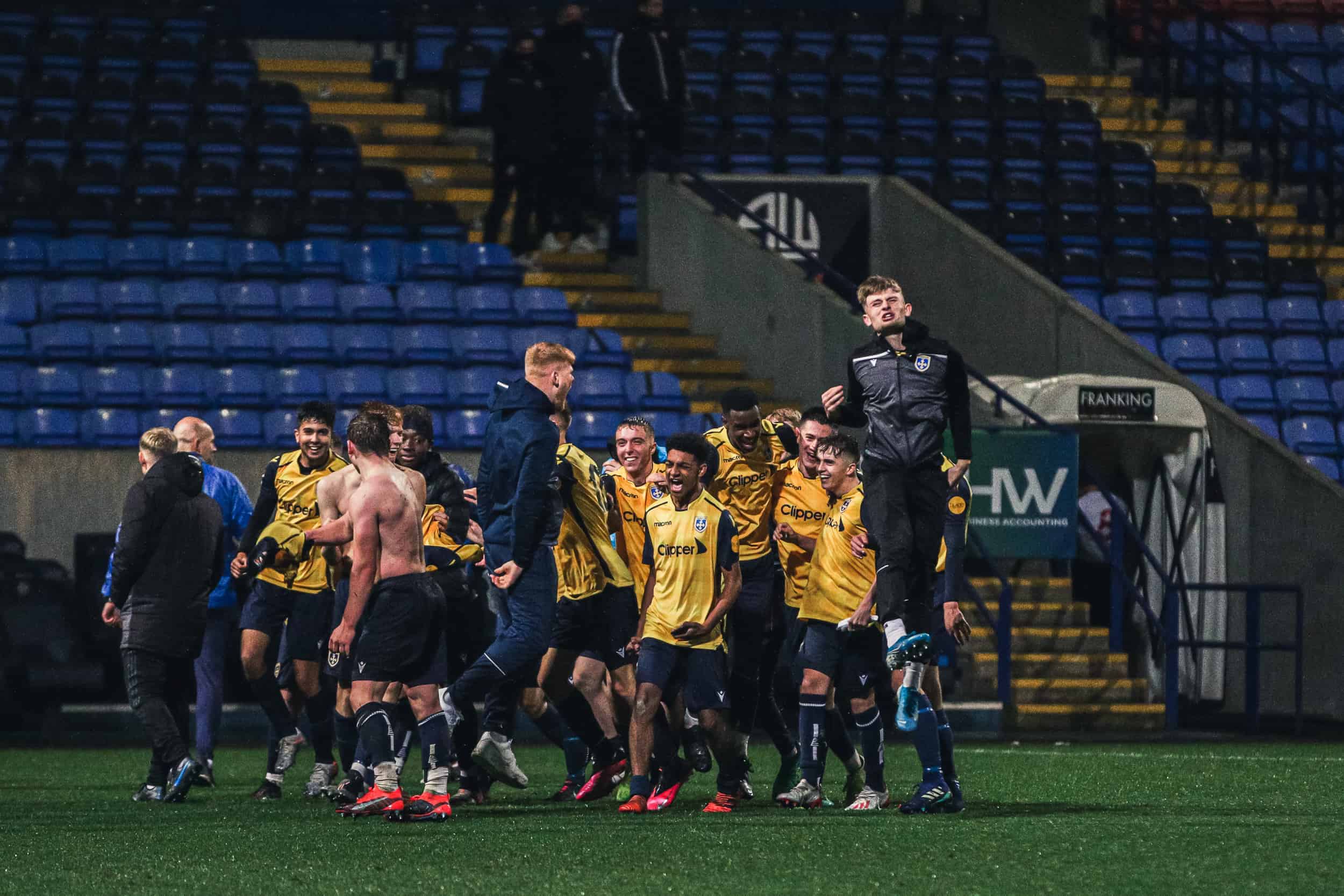 Guiseley AFC’s Under-18 Academy side notched the most amazing FA Youth Cup win when they travelled to play Bolton Wanderers in the First Round Proper on Wednesday night.

Dave Currie’s young charges pushed themselves to the limit in a period of extra-time which saw substitute Ethan Hudson-Parker rifle home a superb goal after a lung bursting run.

The whole team were virtually out on their feet after the do or die effort they had put in against a professional club side but the discipline Currie and coach Danny Ellis have instilled into the side saw them through.

It was a tough encounter as the Young Lions expected but it was the Guiseley lads’ desire to win that saw them through epitomised by Lewis Hey who had made a first team debut as a substitute the previous evening.

It was Hey who produced an 89th minute equaliser just as it looked as if their cup dreams would be ended. Bolton, in their magnificent University of Bolton Stadium, were a class above as one would expect of a full time pro squad but they hadn’t reckoned with the resilience and battling ability of the Guiseley side.

Bolton took the lead in the 23rd minute after a period of dominance with Bright Amoateng finding space to twist and turn and then fire home. This was the first goal Guiseley had conceded in their FA Youth Cup trail of four games this season and it stung. They battled for every ball with Chuk Molokwu, Harrison Leigh and skipper Ollie Brown making some timely interventions whilst right-back Josh Calvert was his irrepressible self always willing to challenge and battle for the ball.

Guiseley pressed forward whenever they could but just did not have the guile to break down a solid Bolton defence.

Molokwu left the field for treatment for a bloody nose but returned to the fray to battle on.

Darwin King had two defenders on him all the time but he ran and ran for the cause and thought he had bagged the chance of an equaliser when the referee blew for a penalty as the ‘keeper brought him down but the linesman ruled him off-side.

Hagie Damba stood big and strong in the Guiseley goal and made some vital saves as Guiseley went in to the break trailing 1-0.

Guiseley created some pressure early in the second-half as they introduced Ethan Hudson-Parker for Jnai Trought. Hey was starting to control Guiseley’s play and he curled a free-kick in which the ‘keeper palmed away.

Bolton weathered the Guiseley storm and worked their way back into the game as the injured King was replaced by Harry Glover with three minutes of normal time to go but Guiseley were not done.

Hey seized his chance from 25 yards out to net a dramatic equaliser which took the tie into extra-time. The ball had come back out to him after Glover had chased the ‘keeper down forcing him to make a poor clearance.

And so to extra-time. Harrison Leigh put in a great challenge to prevent a scoring chance for Bolton and this seemed to demoralise Bolton. Tired limbs were getting the better of players on both sides and players were starting to go down with cramp but Calvert typified Guiseley’s spirit limping with cramp and shattered but still fighting for every ball.

The spirit of this Guiseley side was such that it broke Bolton and they succumbed to a superb winner from Hudson-Parker in the 104th minute as he broke away at speed and lashed the ball into the net.

This galvanised the Guiseley lads and they saw out the second period of extra-time like old pros with every player giving their absolute all in a magnificent performance.

The game was watched by 1, 199 people on the live stream and they were well and truly gripped by the drama of it all.

The Guiseley boys were a real credit to the club and now they eagerly await the draw for the Second Round which will be made tomorrow (Friday) at 1pm.