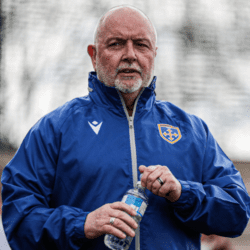 Steve Kittrick rejoined The Lions after nearly nine years away from the club on 11th April 2022 and started his second reign with a 2-0 win at Kettering. Appointed on a caretaker basis until the end of the season Kittrick is well known to the Guiseley fans having achieved promotion with the club back in 2010 and several playoff battles.

The former Ossett Town, Scarborough, AFC Telford United and Matlock Town manager was in the hotseat at Nethermoor for five years having racked up 311 games and 179 wins during his time in charge. 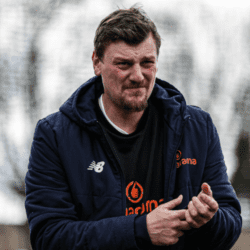 Steve brought Luke Potter into the fold as his assistant, a man who he previously worked with at Matlock Town. The former professional footballer has also managed Athersley Recreation.

Luke’s playing career was sadly cut short due to a recurring knee injury but he did make 28 appearances for Barnsley after coming through their academy. Luke worked as a coach in The Tykes’ academy and was also Ossett United Assistant Manager before linking up with Kittrick at Matlock. 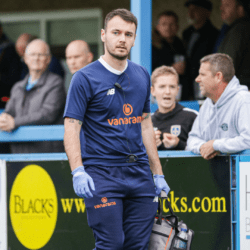 Russell joined the club on 14th August 2021 and brings with him a wealth of experience of sports medical needs and requirements including work at Sheffield United, Rotherham and Rugby League side Hull FC.

On joining the club Russell said: “It’s a great opportunity, the club comes with a great reputation”

Russell will work with The Lions on match days alongside his work at Lincoln City academy and his contributions at Rotherham United. 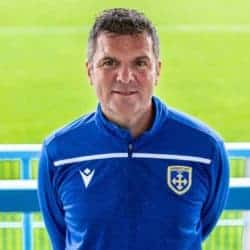 Gary joined The Lions at the back end of the 16/17 season and helps the side prepare on a matchday by arranging all the playing and warm-up kit.

Proctor is also found collecting all training equipment such as footballs and cones from the playing surface pre-match.

Adie is a familiar face to Lions supporters having held many roles at the club throughout the years.

Since his retirement Adie couldn't be kept away from Nethermoor and now volunteers as a Matchday Assistant.

He is often found in the dugout and on hand to help prepare warm ups, kit and much more. 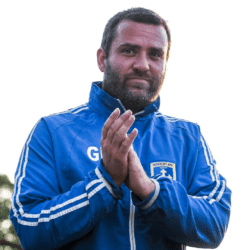 Glen joined The Lions first team setup during the 18/19 season and works closely with the Management Staff both at training and on a matchday.

The former Guiseley Vixens manager and Director of Football is often found out on the pitch before a game, then he will closely analyse the play in the stand at Nethermoor.

As a youngster Glen played for Sheffield United and Barnsley and is currently Head of Football at Bradford University.

Preston has won five league titles in as many years with Bradford University, Guiseley Vixens and Huddersfield Town Ladies.

Glen has racked up plenty of experience working for Leeds United as a Player Analyst, at Millwall as an Opposition Analyst and at Aston Villa Women as Head of Analysis.

He took up a First Team Coach role at the beginning of the 2021/22 season to accompany his work as a First Team Analyst.