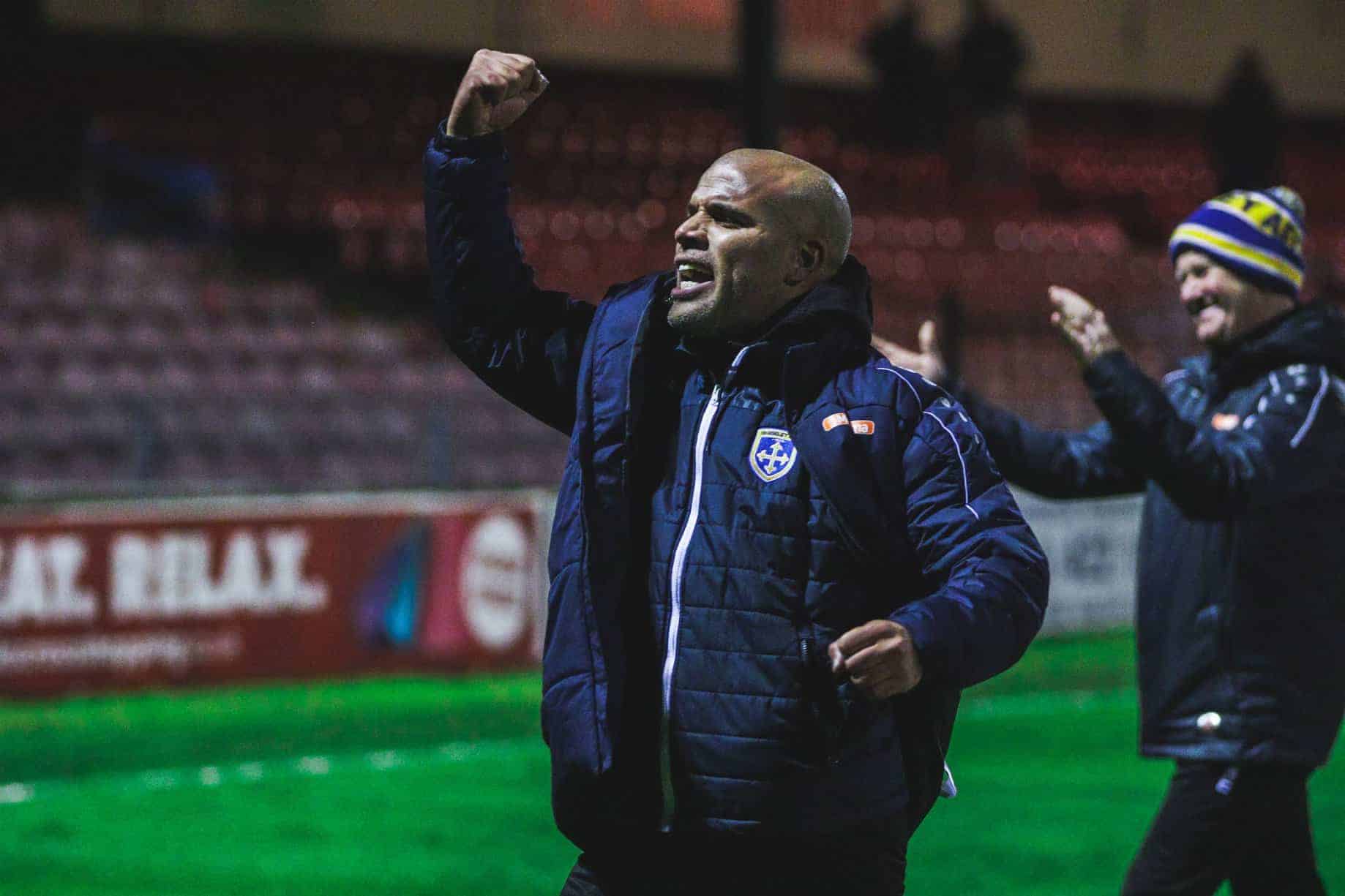 In the second part of Simon Bullock’s interview with Marcus Bignot the Joint First Team Manager speaks about developing younger players, the absence of fans and the support shown by the Lions fans from home.

This interview was conducted and written before the 20/21 season was declared null and void.

A success of this season is the minutes given to the academy players, particularly Nathan Newall, Adam Haw and Lewis Hey who have done well. Was bringing those players through a big aim this season?

Myself and Russ have always had that reputation of bringing players through, developing them and moving them on. I’m lucky enough to be in that development arena, whether that’s international with England, with my own academy or with Villa, and at Guiseley we’ve mirrored that in terms of bringing players up. I think it’s really key to develop and produce your own. Supporters like seeing their own, players who have a real affinity and connection to the club. Producing your own players has a benefit financially as well. There are no negatives to it, there’s only ever positives with it in terms of developing your own. Ultimately, they then become regulars within your team, so that’s something we certainly won’t come away from and is always something we will encourage.

Although you may not be happy with the club’s current standing in the league table, are you and Russ confident the club can climb up it in the coming weeks?

We’ve been hit in terms of, year one, it’s been well documented. The administration officers were coming in to clear a debt and football took a backseat. It was all about reversing the debt we had incurred. We did that in year one and year two was about stepping on and you saw that, before the season got curtailed and you could see the direction the football club was going in. We just finished outside the playoffs on the points-per-game system. That’s the direction we wanted to take the club in. Then COVID hit, and we lost that we lost that momentum.

We weren’t able to sign players we wanted to keep on. We wanted to keep the group, and add one or two, as well as bring emerging talent from the academy coming underneath. So, we’ve had that emerging talent come in, like the names you already said, but we lost players we wanted to keep, and we were unable to add that one or two to take us to next level. So, we’ve had to take a massive step backwards. We’re kind of back in year one again. But thankfully, we’re back at year one with no debts, but if we continue, that is a worrying sign with the situation we’re in. We’re back at year one again, but it’s better than before, because we haven’t got that financial burden around our heads.

Would you say that the absence of Guiseley fans has impacted on the team and results, particularly at Nethermoor?

I watch and listen to a lot of football and at Guiseley we play on the front foot. We’re really aggressive, we like to go after teams, we like to high press and supporters really help that. There’s me and Russ driving them from the side, and when you play on the front foot, supporters get behind you, they really do. You look at someone like Kaine Felix and the way he plays, the fans appreciate the work he puts in. But if you’re a controlled, patient team, there’s less of that.

I think the style that you play, is governed by whether you missed fans or not, because if you are a team that plays through the thirds and it’s a slow build up, you take more risks and there’s no pressure, you’re actually better playing without fans, because fans will be asking, “why are you passing back to square? It’s too slow.” It’s interesting.

You look at Liverpool this year and how they are missing the Anfield crowd, then you look at Manchester City who are just embracing this situation because with their style of football, the fans applaud them when a goal goes in because they’ve just seen art. Liverpool play front foot, heavy metal football because it needs music behind it. I look at Man City and its theatre, it’s the beautiful game. You don’t need words, you don’t need songs, it’s there in the performance. That’s a nice summary actually, I’ve never seen it like that before. Man, City like watching a ballet. It’s beautiful, whereas watching Liverpool is like going to a concert. You need the music, you need speakers, you need the crowd there to drive the players. We’re a little we’re like that. We miss our fans massively.

With an eye to next season, what are the aims for the club and yourself?

I think anyone who looks at the right here, right now will see that we’ve got to make sure there’s a football club next season. That’s the be all and end all. I can speak on behalf of my academy, Solihull United, that we are desperate for promotion. It means everything to us, because we’re losing players to higher leagues and we’re not getting a penny for it. We lost Kyle Hudlin to Solihull Moors for nothing and the list goes on. Kyle’s got the potential to kick on again. There was talk of him going in this window and with the level we play at; we get no compensation for the players we lose. So, it was massively important for us to gain promotion and we’ve missed out on that. But then at the same time with my director’s head on, for me financing the football club, it’s a relief that the season hasn’t carried on, because we didn’t get any sponsorship. We didn’t get any money in, so it was me funding it. I’m only talking about step seven, so I can’t imagine what it’s like to fund a step two club. Well, I do because we know the finances, but I would never ask our chairman to ever put our football club in a financial predicament. Never. So, with Solihull United, I’m relieved there’s no financial burden, but I’m also disappointed that there’s no football. But the most important thing, is that there is a Solihull United next year. The most important thing is that there’s a Guiseley next year.

I find it ludicrous, that currently, we’ve suspended the league based on no testing and no funding, and as far as I’m concerned, that situation hasn’t changed. Yes, there’s the token gesture introduction of flow testing, and I’m glad there’s an eye on health and safety now, but financially, there’s still no solution. So, I don’t get why we’re even talking about testing, until that changes. I can’t see any other way how we can carry on the season, because you’re going to lose football clubs. We are going to lose football clubs, and like I said, I can talk first-hand about my little Solihull United about how we’ve lost our education programme, which means we’ve lost income and there’s no funding from that. We lost sponsorship in year one, so we’ve got no education programme, no sponsorship and no money coming in. That’s what we were relying on, and we haven’t got that.

At Guiseley, we haven’t got any supporters coming in, so where are we getting money from? We’re losing and draining money every day while this goes on and decisions have got to be made ASAP. We’ve had long enough to know whether we’re going to get grants or not, and it doesn’t look like it so, for me, there’s only one outcome. There’s no testing, there’s no income and there’s no more grants. I think it’s a pretty straightforward decision to make.

Finally, do you have a message for the Guiseley supporters about the support they’ve shown during this time?

Unbelievable. Yes, I work on the elite and international stage but, for me, non-league is where you get the real essence of football, because nine times out of 10, people are there because they want to be there. They need to be there, because they love the game. Where else do you get so many volunteers who come and do what they do for nothing? The fans who watch on YouTube livestream, the guys who are doing that, they’re doing it for nothing. The supporters who work hard in the week and even though money’s tight at the moment, they’re still donating. Non-league football never ceases to amaze me. It’s the heart and soul of this country and the non-league pyramid is key to football.

For me, Guiseley just typifies the real essence of non-league. I had it Solihull Moors and I see it at Guiseley. To see club people all around the place, Guiseley’s their life and it’s clear for all to see. So, their support never goes underestimated and we appreciate everything. Credit goes to the volunteers too, for all that they do because it’s them and the fans, who make non-league football what it is. In this difficult time, at Guiseley, they have helped us to just concentrate on football, and they’ve done a superb job, because to get the ground up to COVID regulations and testing absolutely fantastic.