Guiseley had to dig deep at a freezing Hurst Cross this evening in order to come back from a goal down and the overcome dismissal of striker Jordan Thewlis to register a 2-1 win and set up a Third Round Tie away at with National League leaders Chesterfield on Saturday 18 December. Read more in our match report sponsored by BuildADrive.com.

It was Ashton who were the quicker out of the blocks with on a bumpy and uneven pitch with Florian Yonsian taking advantage of some questionable defending to open the scoring after just five minutes.

The Ashton bench then set the tone for the match when they were incensed minutes later as Liam Tomsett went down in the box under a challenge from Lions captain Hamza Bencherif, but referee Ed Duckworth was having none of it.

As the visitors gradually began to get a grip on the game it was unlucky thirteen for the home side as Prince Ekpolo won a competitive tackle in midfield and laid the ball off to Lewis Hey who’s cross from the left was tucked home by Jordan Thewlis to square matters. 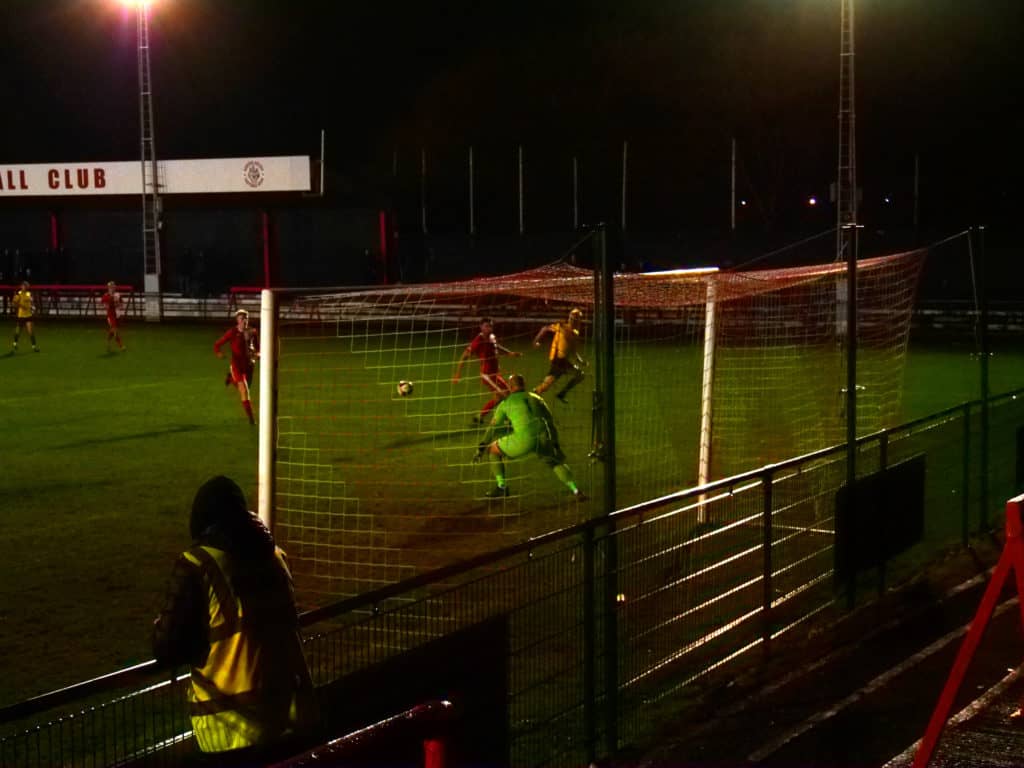 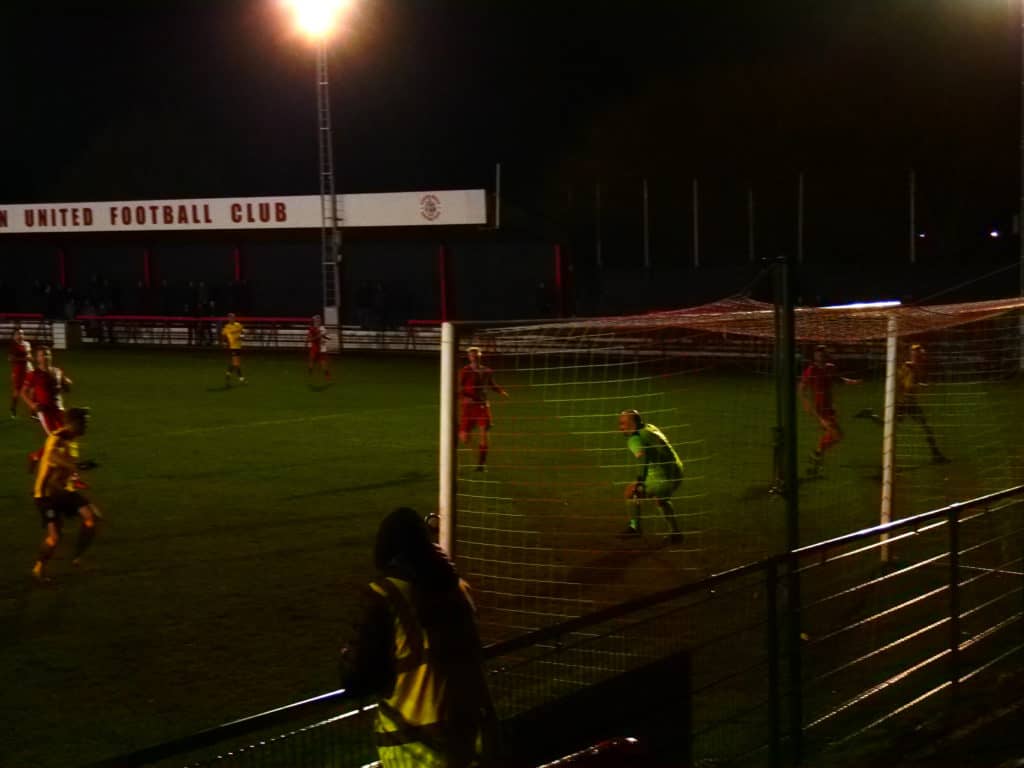 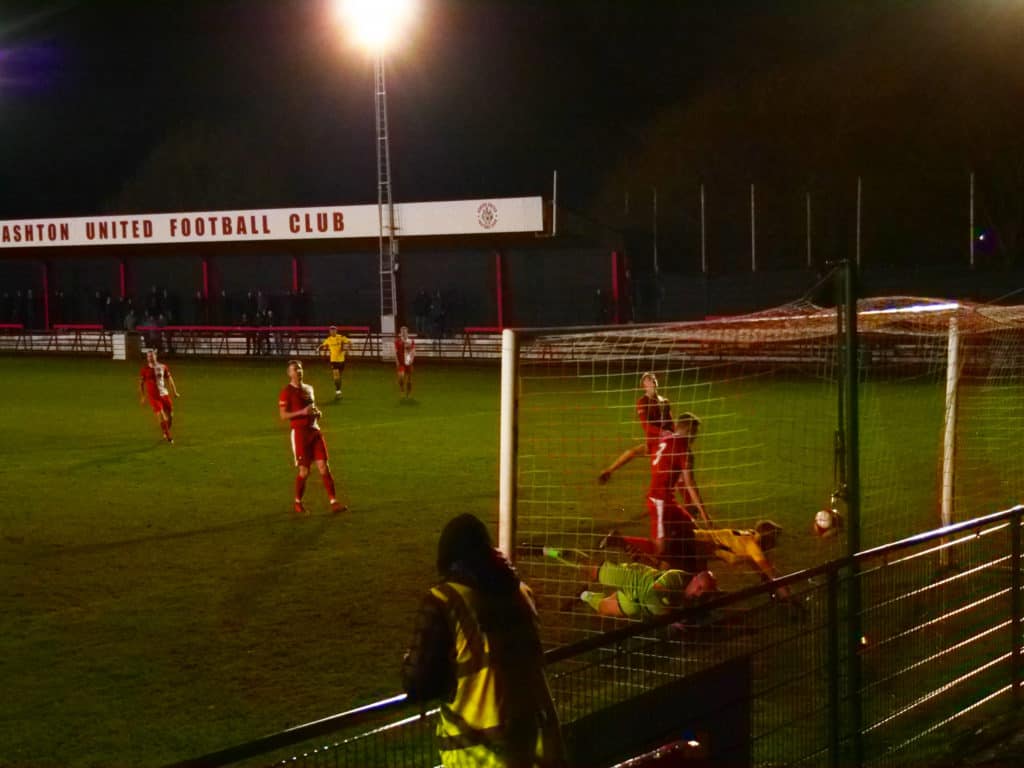 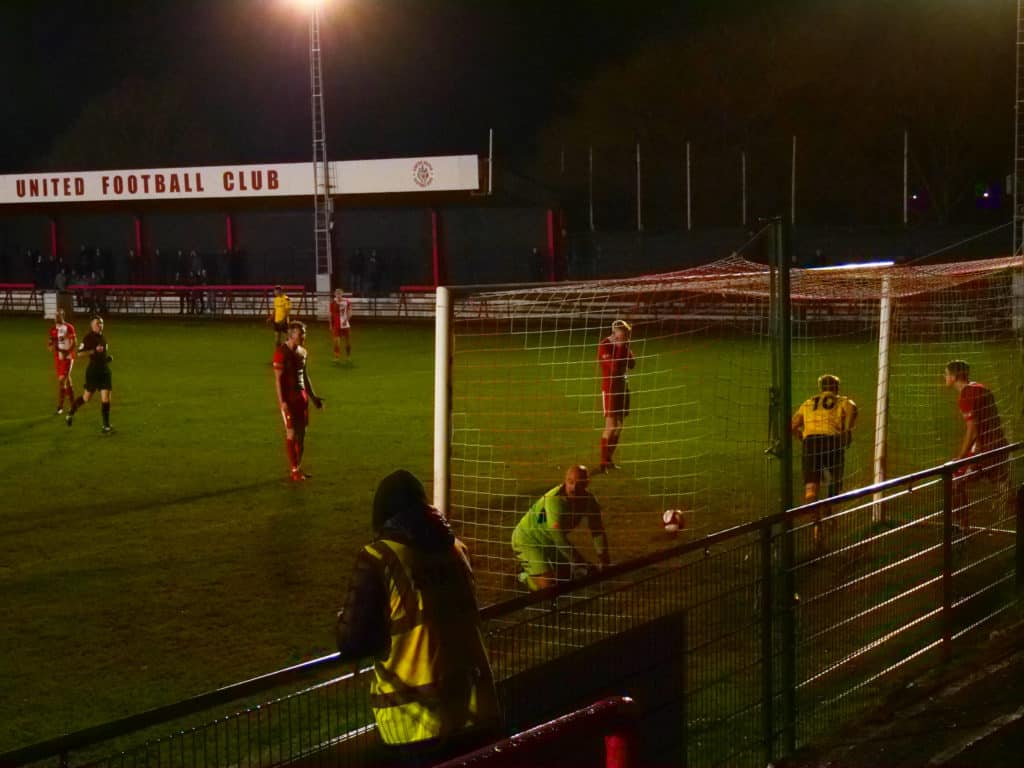 Ashton continued to threaten but as the Lions got on top home keeper Greg Hartley pulled of a tremendous double stop from Jamie Spencer and Reagan Hutchinson before denying Thewlis a second goal minutes later.

There was no let-up in the pace as the second half got under way with George Cantrill executing a crucial block to deny Michael Brewster early on but it was Guiseley who found the composure to put themselves ahead on 66 minutes when the excellent Thewlis slid the ball through for Spencer to finish with aplomb.

Brad Nicholson then had a golden opportunity to wrap things up but his volley at the back post sailed over the bar.

Then when Harry Coates went down under an innocuous challenge from Thewlis fellow defender Michael Raynes got involved and both players were given a stern warning by the man in the middle.

However, when the Lions striker went in for what looked like a 50-50 challenge on 70 minutes with home full back Will Hall the youngster stayed down and amid Ashton protests the former Boston man was shown a red card. Hall eventually being helped off after lengthy attention.

Guiseley responded by sending on the effervescent Josh Stones in place of Hey and the youngster soon found himself in the referees notebook for a foul on Raynes.

In between times Brad Wade saved from Ben Hardcastle to maintain the Lions advantage and then saw Yonsian shoot straight at him with only the young keeper to beat.

Having soaked up a virtual onslaught from United since the dismissal of Thewlis, Stones nearly grabbed a third when he latched on to Cantrill’s ball but Hartley pulled off another good stop and despite five minutes of added time Guiseley saw the game out to register their second successive win on the road.