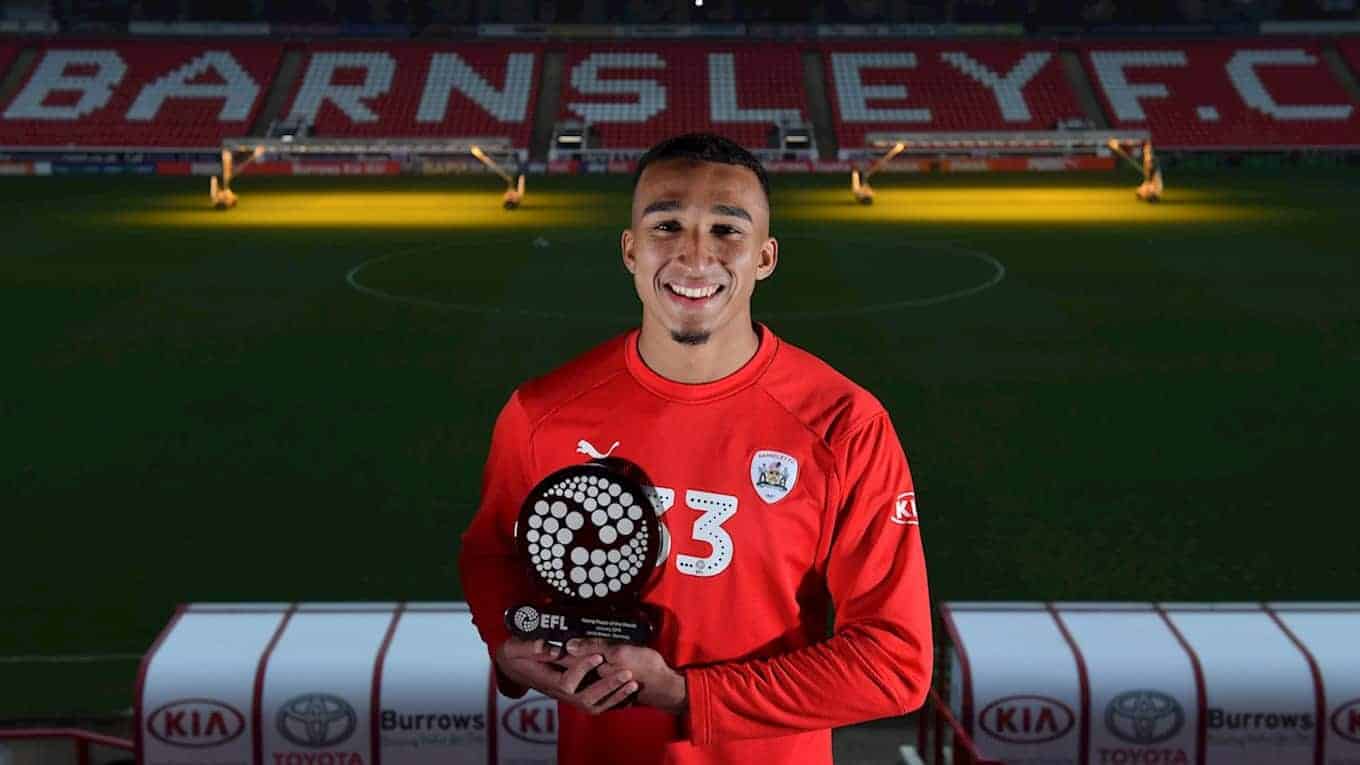 Simon Bullock chatted to former Lion Jacob Brown about his short time with the club and progression into a Barnsley first team regular.

Q: You started your career with the academy at Guiseley, what age did you sign and what were some of the highlights of your time at the club?

A: I signed for Guiseley when I was about 16. I wasn’t there for too long but I made a lot of friends during my time at the club. I got on well with the staff and my main highlight was when I played for the first team in a cup match. I think we ended up losing that game, but that was my first real taste being in a first team and I really enjoyed it.

Q: You signed for Barnsley as a teenager, yet to become a first-team regular at Guiseley. How did the move come about and what made choose Barnsley as the next place to further your career?

A: When I was with Guiseley, we played against Barnsley U18’s in a friendly match and we actually beat them 2 -1. I scored both goals and I was playing CM and RM and after the game the U18’s coach came up to me and said that they wanted me to come on trial and from there I ended up going on trial for quite a while and then signed so it all moved quite quick.

Q: How did you find the jump from playing U19’s football to playing U23’s football at a higher level?

A: The jump was quite tough but a lot of the training that I had at Guiseley prepared me and I think I adapted quite quick so it wasn’t too hard but it took a bit of getting used to.

Q: Soon into that season, your form was rewarded with your first professional contract, how proud of a moment was that for yourself?

A: It was a great moment for me. I think before, I was on the bench for the first team against Brentford and that was when I made my debut but after that they gave me my first contract and it was just the best feeling ever. Obviously growing up, that’s what you’re aiming for so to actually sign it was great.

A: No, not at all. I think the day before, one of the strikers got injured on the day that we travelled. We travelled on the Friday and the game was on the Saturday, so I was on my way into training for the U23’s and I was told that I was going to be travelling with the first team and I was really shocked. I thought I’d travel and be on the bench. I wasn’t really expecting to get on but I came in the last few minutes and so to make my debut was a very good feeling.

Q: On the final day of the January transfer window the following season, you went out on loan to Chesterfield. Although that season ended in a relegation for the club, how valuable for you to get your first taste of regular first-team football?

A: I definitely needed to go on loan at that point because I needed the experience. Obviously, it didn’t go very well for the team, but for me personally to get a few games under my belt playing first-team football was exactly what I needed heading into the season after.

Q: That season also didn’t end too well for Barnsley, but from a personal perspective did the relegation come at the right, because it allowed you to stake your claim to be a regular under new manager at the time Daniel Stendel?

A: Yeah, definitely. Obviously, you never want your club to get relegated but I think the fact that Barnsley did go down that season, gave me a massive opportunity to get my place in the first team. I just worked hard that pre-season and with us being in League One, it gave me a chance to play.

Q: I remember one of the games that really set Barnsley on the promotion track that season was the 1 – 0 win away at Walsall when you scored a last-minute winner in front of the away end. Is that one of your best memories in football to date?

A: Yeah, that’s definitely the best memory in all of my footballing career. It was a massive game for us and to actually get the goal in the last minute was the best feeling ever. Running into the away end was crazy. Every time I watch it back, I get Goosebumps still.

Q: You’ve carried over your form from last season into this one, with 8 assists to your name already. How are you finding the step up from League One to the Championship?

A: I had a hamstring injury at the end of last season so I missed the first few games of this season and when I did get back in the team, I found it quite hard to get back to full fitness and make the jump to the league above. Now that I’m back playing and I’m playing in my main position up front, I feel like I’m a lot more confident and that shows in the assists that I’ve got this season.

Q: The team’s upturn in form has coincided with the arrival of Gerhard Struber, how key has he been in helping the team in your fight against relegation?

A: I think when he came in, he gave everybody a little confidence boost which was needed. He’s also tweaked the formation a little bit and it’s worked for us so far. Just the way that he approaches the players has been really good for us and we’ve started doing really well so I’d say we have a good chance of staying up.

Q: Looking ahead, how do you see your career panning out and do you have the desire to test yourself in the Premier League one day?

A: At the moment I’m just looking to play as many games as I can, that’s all that I want to do and help Barnsley stay up.

Q: Finally, how would you sum up the importance that Guiseley has had on your career and how important was the work of Dave Currie and the other academy coaches in setting you on the right track to, hopefully, have a long and successful career?

A: He was very important because he saw the potential that I had when I started at Guiseley and he always gave me a lot of confidence in myself. He said that if I keep working hard then there’s a chance that I would go far and that’s what I’ve always wanted to do, just keep working hard. It was Guiseley that gave me the opportunity to play against Barnsley and it was a showcase for me. If I was hadn’t signed for Guiseley, I might not have got that opportunity so it all worked out really well for me.

We would like to thank Jacob for taking the time out to do the interview and wish him the best of luck for the rest of the season.