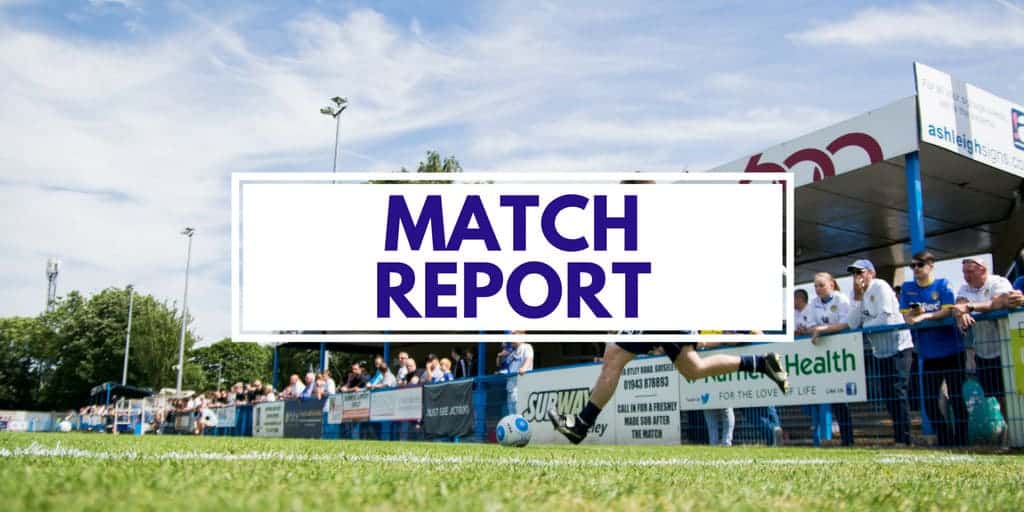 Kaine Felix provided a sublime finish to score the only goal of the game and secure the vital three points to ensure that Guiseley will be playing National League North football next season.

In a scrappy contest the Lions were given a golden opportunity to establish an early lead when Kaine Felix was tripped in the area by ex-Lion Simon Ainge after just three minutes.

Having converted a spot kick in the last home game Kingsley James stepped up only to see his effort saved by Jake Turner although the Darlo keeper looked to move off his line early.

Unlike in previous games the penalty setback didn’t dent the home sides confidence and with Kennedy Digie mopping up at the back, Kayode Odejayi winning nearly every header and Felix proving a constant threat the visitors backline were having a torrid time.

The direct approach eventually paid dividends on 26 minutes when Felix took a ball down the channel, got the better of Ainge and Terrence Galbraith before lifting the ball over Turner for the opener.

Ten minutes later he went close again this time with a shot across the visiting custodian that crept just the wrong side of the far post.

Andy Halls also put in a superb cross minutes later that found no takers as the home side looked to double their advantage.

Having created few chances in the first period the Quakers should have equalized on fifty minutes but Stephen Thompson’s wild shot sailed into the car park when he had only Marcus Dewhurst to beat.

Man-of-the Match Felix was then involved in a move which ended with Will Hatfield firing into the side netting.

Having taunted the visitor’s backline all afternoon Ainge and Terence Galbraith were both cautioned for fouls on Felix before he eventually left the field to an appreciative round of applause and was replaced by Jack Dyche with six minutes of normal time remaining.

Five minutes of added time was played out relatively comfortably by the Lions to ensure the three points and safety, which as it transpired was purely academic as FCUM lost at home 2-1 to Blyth Spartans while Ashton United went down by the same score at Boston to seal both their fates and in all probability a return to the Northern Premier League .

After the game Cliff Moyo was presented with the Craig Shearstone GAFC Supporters Club player of the season trophy.

The Lions now travel to Kidderminster on  Saturday for their lastleague game safe in the knowledge that whatever the result they will finish in nineteenth place in the table, which given their slump in form since the New Year’s Day win at Park Avenue had looked likely to evade them at times. But with matters off the field now hopefully settled the future is perhaps looking a lot brighter?