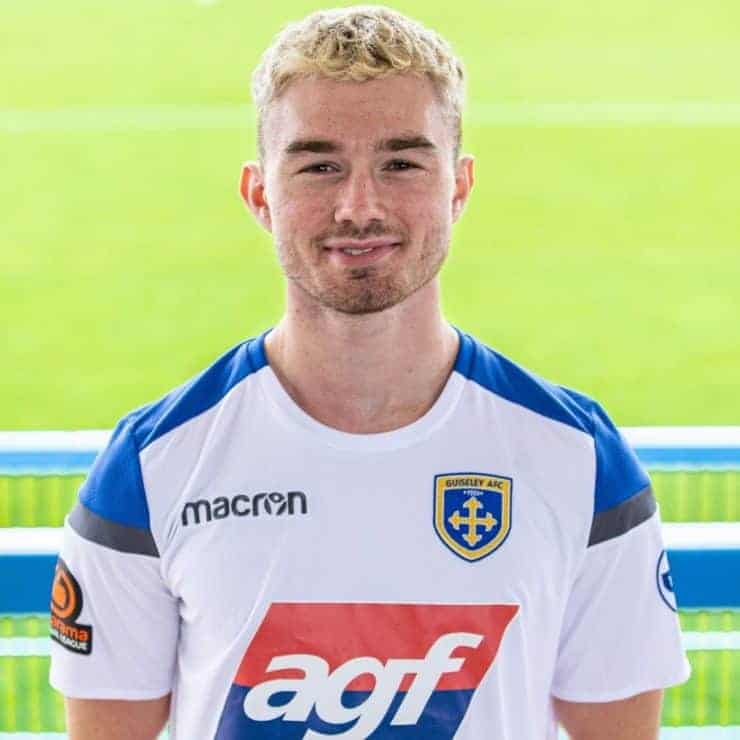 Home, Away and Training Kit Sponsored by Tradeway Shipping.

After impressing as a trialist in pre-season games right-back Regan Hutchinson signed for Guiseley on 7th August 2021.

He has a fine footballing pedigree being the nephew of brothers Glynn and Ian Snodin, who played respectively for Leeds United and Everton. Both the Snodin brothers have been a big influence on the former Sheffield Wednesday Academy player but Glynn in particular.

Regan said: “As assistant manager at Chesterfield he has had more to do with me and has been massive for me as I have made my way in football. He has given me his time and kept me in the game and given me tips. As he is still working in the game he understands the modern game and has been really helpful to me.”

Rotherham-born Regan joined the Sheffield Wednesday Academy set up at the age of six leaving at the age of 15 to join the Rotherham United Academy. A further move at the age of 17 took him to Chesterfield from where he joins Guiseley.

Regan, who can also operate as a winger, is delighted to join Guiseley and cannot wait to get started. He said: “After not playing much at Chesterfield over the past couple of seasons I am looking to seal a regular place at Guiseley where there is a great squad and management.

“The two managers bring different things to the game but even as a triallist they have already made a big impression on me. Russ O’Neill has been spot on, putting an arm around me when I needed it after I picked up an injury. Most other clubs would have just moved on and not given you another chance but Russ really helped me. As for Marcus his tactical knowledge is incredible and I have learned so much from him already.”

Regan added: “I cannot wait to get started, I feel really wanted at this club and very much part of the group and that is a great feeling to have. It is great that the club trains virtually on my doorstep in Sheffield but for games I have been travelling with George Cantrill, Brad Nicholson and Lebrun Mbeka who are all from my area. They are a great set of lads but the only one I knew previously was Brad, we were at Sheffield Wednesday at the same time.”