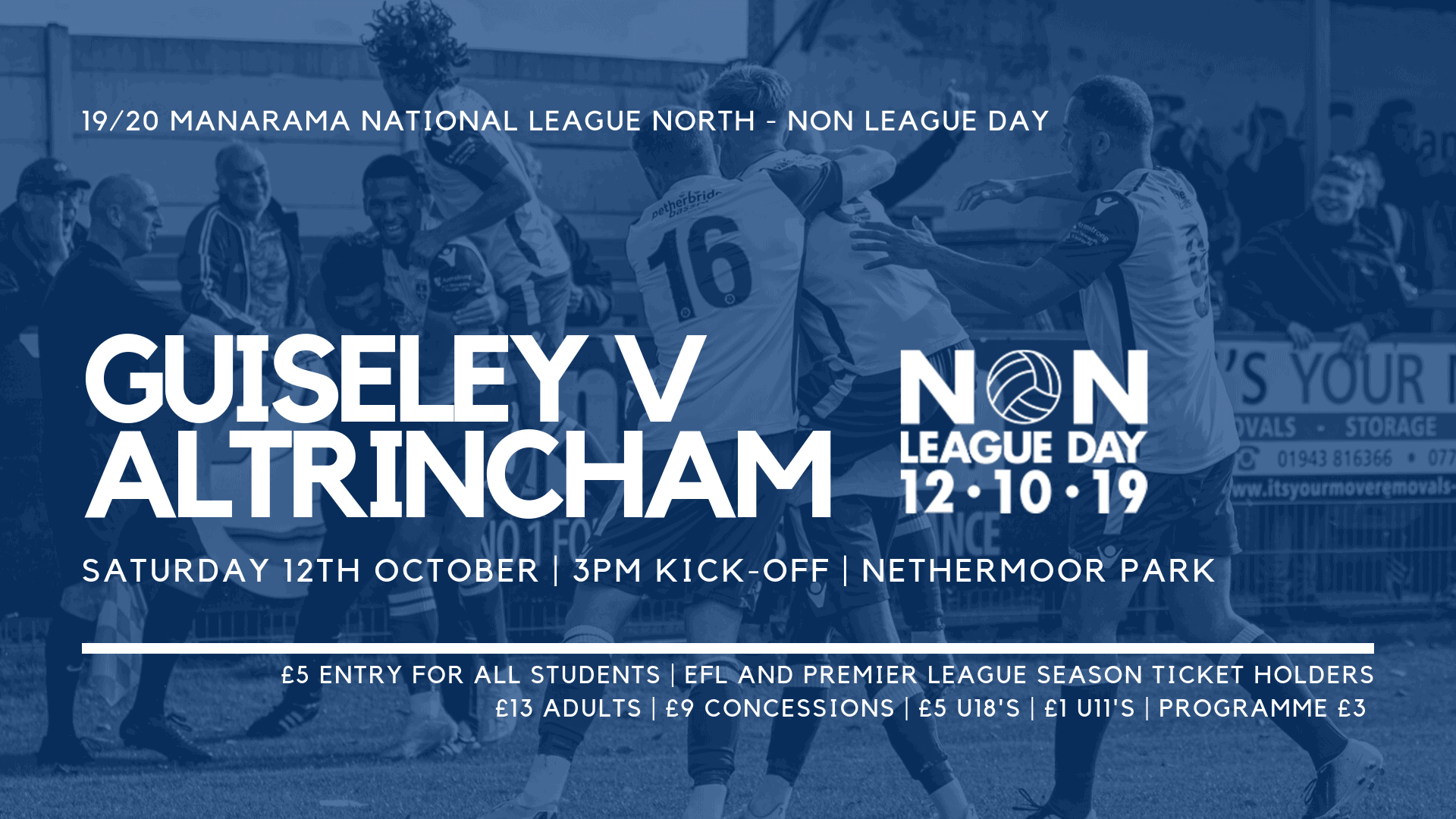 Altrincham are the visitors to Nethermoor on Saturday as we return to league action on Non League Day.

We have a couple of special offers on and hope to see a bumper crowd at Nethermoor for the MANarama National League North clash, it is just £5 entry for students, EFL and Premier League Season Ticket Holders, all you need to do is show your valid NUS card/student card or Season Ticket at the turnstiles to take advantage of the offer.

Why not bring down a friend, work colleague or a member of your family to give them that non league experience and show them what is on offer at Nethermoor Park.

It’s been a good season so far in the league for Russ O’Neill and Marcus Bignot’s side who sit in seventh after an Emirates FA Cup appearance last time out.

Altrincham are currently in 18th place in the league and have had a mixed September which saw two wins, two defeats and a draw before winning 2-0 at Halesowen last weeked live on the BBC Red Button.

Alty’s squad includes a few familiar names in Steven Drench, Conor Branson and Lewis Walters all ready to line up against their former side.

The Lions meanwhile slipped to seventh place last week as Hereford took full advantage of their game in hand with a 2-0 win at Leamington.

Russ O’Neill will be looking for a return to winning ways on home soil after two defeats on the spin in Worcestershire and Cambridgeshire.

Speaking after the last gasp defeat to Peterborough Sports in the Emirates FA Cup last weekend the Joint Manager said “It is a massively disappointing result and performance for us, we were a couple of minutes away from getting a replay, we have made a silly decision in the middle of the pitch and it has cost us.”

With top scorer Aaron Martin serving the second of game of his three match ban on Non League Day, O’Neill said “He is a huge loss, he has 14 goals in 12 games, that is no excuse, we only have ourselves to blame today, we knew what to expect. First half we hit the post and created a few chances, on another day we score them and go on to win, you know what the FA Cup means you get one chance and we have lost the chance today.”

Speaking of the travelling faithful who made the trip to Cambridgeshire in their numbers Russ couldn’t praise them enough “Fantastic, they always do, they all hung around at the end, they applauded us off we know how disappointed they are, you could hear them all the way through so fair play to them, we have to recover now and let’s see what this week brings.”

Captain Scott Garner missed the trip to Gloucester City and had a week to remember “He has been expecting this day to come, he has been in and out of the hospital the last few days and happily enough for him now he has got a baby son, everybody is well, that is one shining light.”

Finally looking ahead to Saturday O’Neill knows Altrincham will pose a tough test “They are a real tough team to play against, they are probably the best footballing team in the league, they will be coming to our place and seeing a nice pitch. We need to get back to that resilience and play with the energy we were at the beginning of the season, at the end of the day we are in the final play off place so we need to fight like mad to make sure we hang on to it.”

Come down to Nethermoor this Non League Day and roar The Lions on!