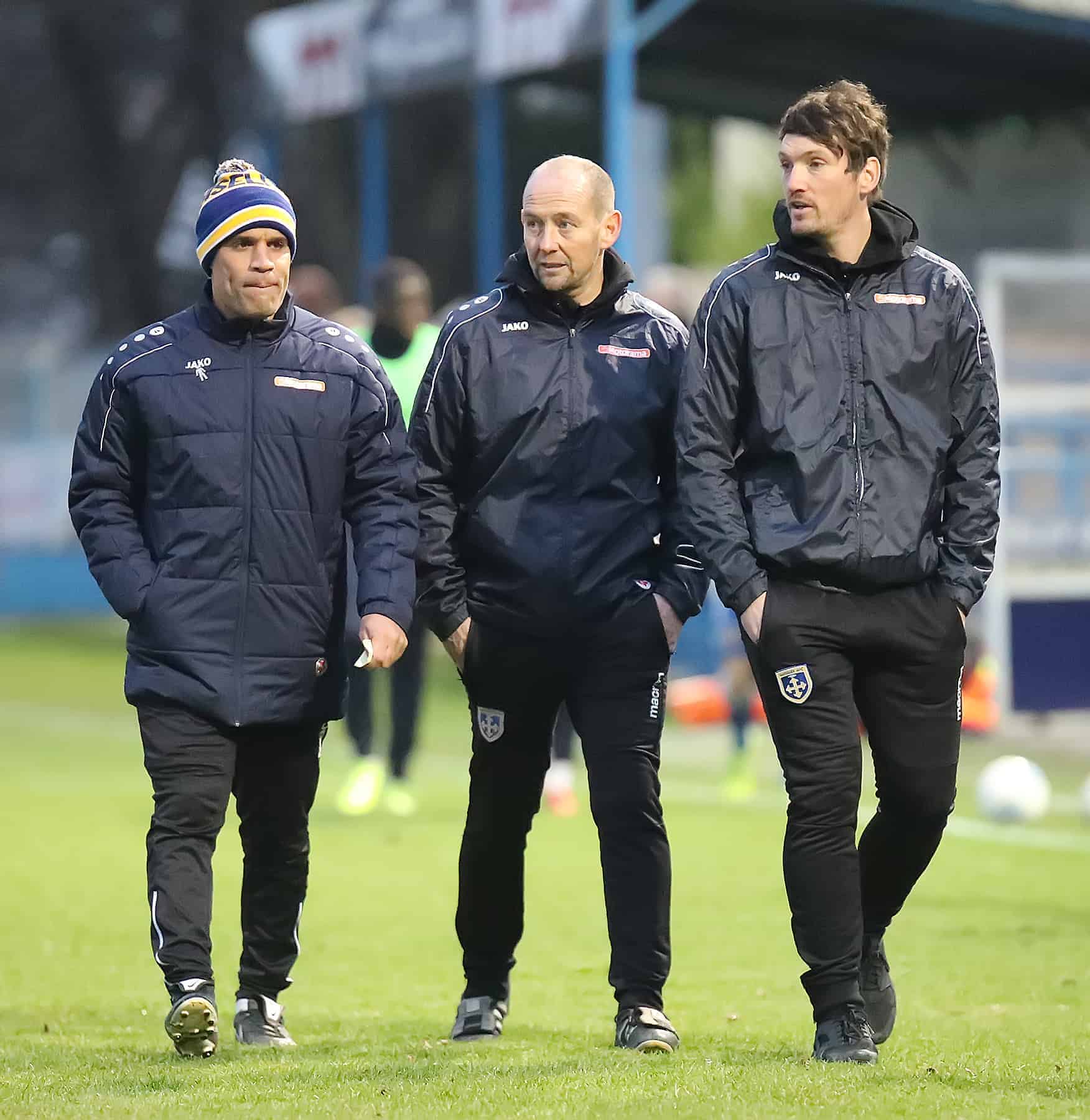 The Management Team held an online question and answer session last night on Twitter, read on for all the answers from the trio.

Covid-19 will hit the club hard financially with £65,000 in revenue lost, if you can donate to safeguard the future of Guiseley AFC please click here, if you would like to donate directly and avoid us paying Eventbrite’s processing fees please use: Sort Code: 40-22-28 and Account Number: 31110004

Cayden: Any names in mind for potential summer signings?

Russ: Hi Lions, Hope you’re all well and keeping safe, at the moment obviously with all the uncertainty in the current situation I don’t see any further signings before the end of the season. We are really happy with the squad we have, but as things pan out, depending on how it develops will determine if we need to bring in any further players but as I said we are happy at the moment.

Charlie: Who is the best trainer at Guiseley?

Russ: On the bus travelling to King’s Lynn for our last game the boys were commenting on how good Aleks Starcenko looks in training so I’ll go with the lads on that one. However at the end of every session we always have a small sided game and to be honest Paul Clayton puts an exhibition on in finishing, so he would also have to come into the thinking.

Paul: Indian all day long! That time Marcus Bignot paid £75 for a taxi driver to pick an Indian up at 3:30am was a very poor chicken balti, never had one since.

Marcus: Indian it’s a ritual for us born and bred Brummies, it’s part of our social life and you can’t beat a curry at the end of a Saturday night, 3 points in the afternoon and Chicken Balti Chips and Nann to end the night.

Dave Robertson: How are they trying to keep the players fit, while they’re scattered across the country and confined to their house? Must be a challenge. And do they think that we’ll see a much changed league if it does resume? Momentum lost, changed squads because of contracts, etc. Who do they think will benefit/lose out?

Russ: Real good question re how we see the season panning out if and hopefully when it’s played to a finish, again there is so much uncertainty around and the biggest obstacle is the not knowing and the fact we can’t prepare or plan for something with no timescale to it. It is obviously going be a factor in one way or another for all clubs, I can only speak for our lads, we are a really motivated group and I have full confidence that if and when the season is ready to play to a finish they will be ready and willing to hopefully assemble as many points as possible from our remaining 9 games hopefully enough to play further fixtures.

John: Hi Russ and Marcus, first of all can I say what a magnificent job both of you and all the boys are doing this season. My question is what advice have you given to all the squad with regard to keeping fit from here on in? Stay safe all of you.

Marcus: As staff we have been on and off calls to get plans moving along, which are least impactful and most productive on our players. We decided that it is in everyone’s best interest to postpone our return to training indefinitely. The change in government tact is really important for the country as a whole and trying to limit the virus outbreaks where possible.

We’ve encouraged our players continue to follow the below

We are receiving different updates from the WHO, Public Health, the government, football associations and the club on a daily basis. We will keep condensing this and giving the information onto our players Right now we are focused on making sure we keep all players and staff, as healthy and fit as possible!

Simon: Which player has impressed you the most this season?

Paul: Tough one very tough… but I’m biased as a forward so I’m going to say Kaine Felix.

Graham: Could you ask Russ or Marcus who he considers to be the best footballing side in our division? I drive people bonkers by telling them I think it’s Altrincham, and I thought our away match against them this season was a classic.

Marcus: I think Altrincham have a clear identity on how they want to play football and have been the most consistent at implementing it over the last couple of seasons. Fans views on how football should be played will always create debate and differences of opinion. That’s why you find yourself driving people bonkers, we have drawn every game I believe against Altrincham since our return back into the North. Are we the El Clasico of the North?

Guiseley AFC Supporters’ Club: Firstly congratulations to you and the players on what has been an excellent season so far. With the squad being so young this season is it a model you are looking to replicate in coming season’s to find tomorrow’s best players and develop them?

Russ: From day one of coming to the football club we have always said that we feel the skill to management is finding next season’s best player and not paying over inflated wages on last season’s best players. Obviously budgets determine if you can afford to pay top money for 16 best players from the previous season if so the team with the biggest budget would win every season and we would all know before start of every season who was going win the league and who would get relegated.

With young players you get honesty and hard work with a desperation to do well however with the lack of experience comes mistakes,but they are honest mistakes and they improve with every mistake they make. We will continue to try and work to our principles moving forward the key to it is keeping the group together and continue to grow individually and collectively, as much as the lads have grown throughout the season,it doesn’t very often happen within any one season.

Graham: Seeing as we have a pause in our season, it’s good to reflect on how much we’ve developed as a club in the past year, and how we now have a better spirit and confidence about the place. Do the managers have any ideas on how we could develop this still further?

Russ: I believe that you the supporters can answer that question for us, in terms of spirit and the feel around the club in general when we arrived 18 months ago we spoke about bringing Guiseley AFC back together. If we’re honest we could feel a huge under current around the club I believe from top to bottom we now have a lot more resilience.

You learn about players in defeat and also you get a feel of exactly how strong a club is after defeat, our supporters lift us now as staff and players after a loss.

We hurt after defeat, when we get home and reflect, it gives us enthusiasm to go again harder next time knowing everyone is behind each other and that is a collective resilience and I’m proud to say we are heading in the right direction now.

Soloman: Which players have surprised you most? (In terms of attitude, performance etc)

Russ: I don’t think there’s any real surprise throughout the squad. As we have said on numerous occasions this season there’s a lot of potential and we have to turn potential into reality. The only surprise would be on a negative front as if we were surprised with any of them it would be because they haven’t stepped up the level as we’d hoped/expected.

Joe: If either of you had to bring one prime player from one of your previous jobs to Guiseley, who would you choose and why?

Russ: Probably Aden Flint (Alfreton Town), he would be the perfect role model to this group. We signed him from step 7, he was our captain at 20 years of age in the Conference North,
We won the league with a 20 year old captain you don’t have to be 33 years old to be a leader. We sold him into league football and he’s had a fantastic career.

Marcus: Losing Aaron Martin I would go for Omar Bogle (Solihull Moors). 62 goals in 111 appearances, fits into our recruitment strategy. He was tomorrow’s best player when we signed him with a point to prove and hungry, he was different to so many players who found themselves out of the professional game at a young age.

Alan: Did you watch the Maradona documentary on Saturday? Who is the best player you have watched and the best you played with?

Paul: No I’ve not watched that yet I know Russ told me to put it on but I was having a romantic night with Mrs Clayton. My idol was Alan Shearer but in most recent times I’m a Ronaldo fan. Best player I’ve played with was Liam Hearn my partner in crime.

Tugger18: With the recent departure of Aaron Martin how confident are the management team on keeping the current squad together?

Russ: Obviously we were disappointed to lose Aaron to Harrogate Town however Aaron is at an age where he was against time to fulfill his dream of playing full time football. All the group have impressed and we’ve made them aware of our desire to keep them together for another season. It stands to reason that when someone does well there will be interest from elsewhere.

However I’m a big believer in continuity and feel the group are developing individually and collectively by the week and I think they would continue to develop at the rate they are doing if they stayed with us. They know they are at a good club with good people who want the best for them and the club and they will only improve in this environment.

Peter: What has happened to Dylan Barkers? Has he been missing his lifts Marcus? Huge talent in my opinion.

Marcus: He outgrew the car so waiting to get into a new car to accommodate him. All joking apart Dylan has huge potential, he has been on loan back to our Academy in Solihull to get some much needed minutes to aid his development.

Craig: If this squad of players stayed together how far do you think they could go as a group ? It would be amazing as a fan to see the progression.

Marcus: To over achieve and this season thus far has been testament to that both on and off the pitch. Sitting in 9th as it stands if we were to achieve a play-off spot it be nothing short
of unbelievable.

At times there can be as many as 8 players playing in any one starting 11 who have never tasted Vanarama National League North football before,which in itself is an unknown in such an experienced division, it is our vision to keep improving and setting the bar higher so we can continue to over achieve and more to the point sustain the over achieving.

Thank you to everyone who asked the questions and to Marcus, Russ and Paul for taking the time out to answer.

Covid-19 will hit the club hard financially with £65,000 in revenue lost, if you can donate to safeguard the future of Guiseley AFC please click here, if you would like to donate directly and avoid us paying Eventbrite’s processing fees please use: Sort Code: 40-22-28 and Account Number: 31110004