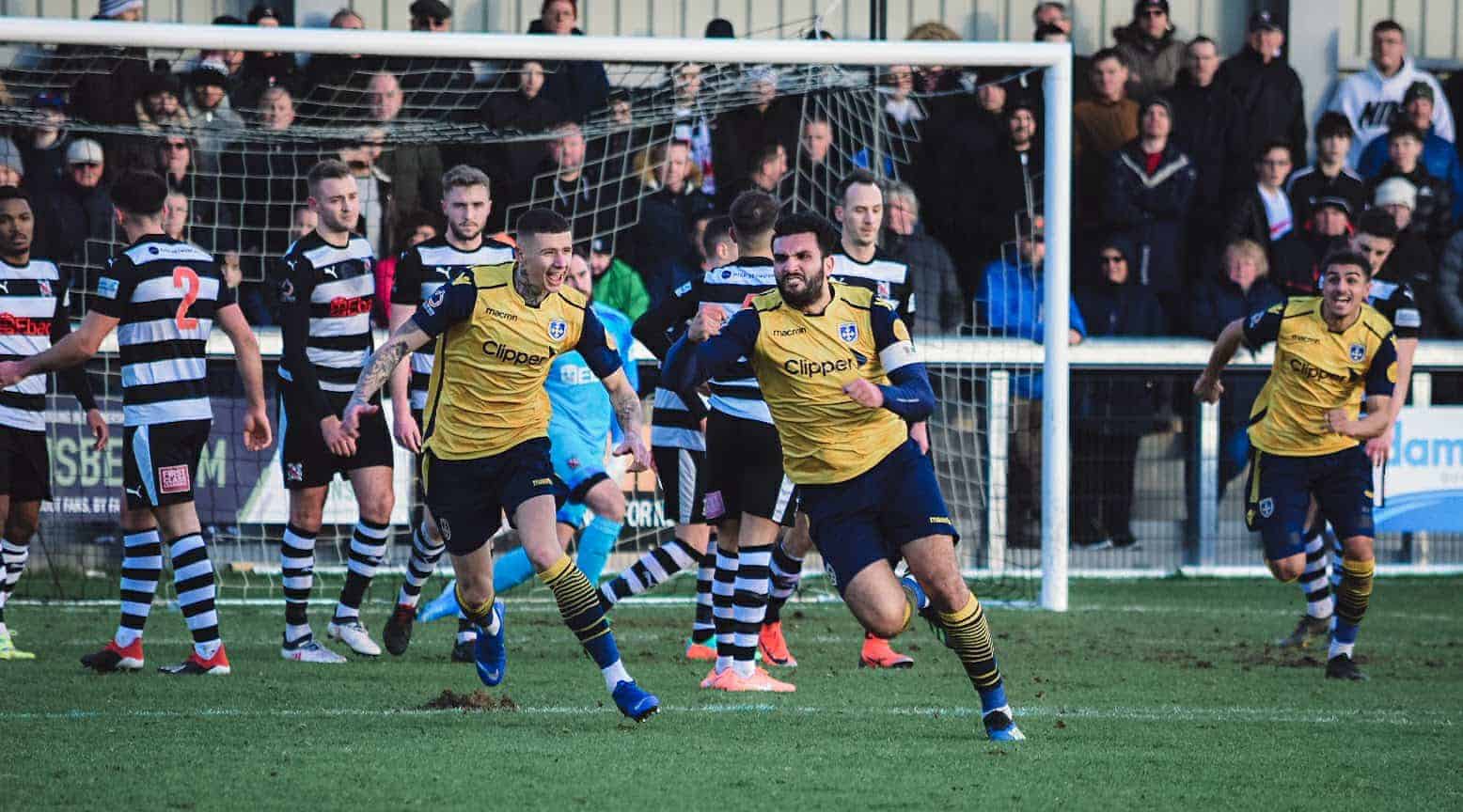 Match Sponsored by The Two Magpies

The Lions return to Nethermoor on Saturday after back-to-back away games which extended the unbeaten away run to nine games as we look to transform our home form with AFC Telford United the visitors for a 3pm kick-off.

The Bucks already have the upper hand this season having won 4-1 at New Bucks Head back in October, our last defeat on the road, as well as a 4-0 win in the Buildbase FA Trophy knocking us out of the competition in the third round qualifying.

Since the last clash with AFC Telford The Lions have rose to ninth in the league just one point outside the play off positions with an impressive run over the festive period but with only one win at Nethermoor so far in 2020.

Narrow defeats to Chester and Darlington were sandwiched either side of a comeback victory over Gloucester City, on the road however Marcus Bignot and Russ O’Neill’s side have picked up eight points out of twelve so far this calendar year with impressive points at Brackley and Altrincham added to the wins over Farsley Celtic and Darlington.

The Lions’ comfortable 3-0 victory at Darlo came via Hamza Bencherif’s opener after Brad Nicholson had laid off an in-direct free kick to his defensive colleague before Aram Soleman’s second half double made it a hugely satisfying weekend.

AFC Telford United drew 2-2 with Altrincham at New Bucks Head on Saturday but fell to a 5-2 defeat at Moss Lane on Tuesday night in the reverse fixture, they did beat Blyth Spartans 4-2 in their last home game before Alty’s visit but have struggled with consistency with that being their only win in the last seven matches.

Following the comfortable 3-0 victory at Blackwell Meadows on Saturday Joint Manager Marcus Bignot said “We have got to be delighted with that, we carried on from Brackley in terms of the result but we challenged the players this week to get to the standards we know they can on the ball. Today we brought all aspects of the game in terms of how to win football matches and that was pleasing.”

“We continue with our clean sheets with five in the last ten, not that I’m counting! We asked questions this week, we wanted to score more goals, be on the front foot, to play more football and in every aspect we had the lot.”

Playing an important part in securing that clean sheet was Brad Wade on his debut following a loan move from Rochdale on Friday, Marcus was keen to praise his new keeper “I was delighted with Brad, the first one on one he came out and made himself massive, he had to keep his concentration and our goalkeeper is really important for us in terms of possession and building from the back. He was excellent with ball at his feet, in his hands and he gave confidence, he can be really pleased with his debut for us.”

Aram Soleman’s brace on Saturday pleased the Joint Manager who was delighted to see the midfielder show his quality “Aram is only young but his social skills gives him a dominance in the dressing room, he is one of the voices and major characters. It is nice to see his personality carried out onto the pitch because we know what he is capable of on the ball, that is the Aram Soleman we know and the one we have been trying to drive and push to get to those levels.”

When asked about the away form Marcus joked “I wish the league was just away games as we’d be third and pushing for automatic promotion! We are hard to beat and the record shows that, since we have changed shape and found this system it has really give us a basis.”

Looking ahead to the visit from AFC Telford United Bignot said “I am looking forward to it, it is a team who have got the better of us in the past, we have to to enjoy this win but when we get back to training our minds have got to be set on Telford and it will be a big challenge, we have got to find a way to get over them.”

Brad Wade is set to make his home debut between the sticks following the departure of Marcus Dewhurst to Carlisle United last week but Aaron Martin serves the second game of his two match suspension following his sending off at Brackley Town. Chris Sang will also be available for selection following his loan being extended from Barnsley on Saturday, the striker will be looking to notch his third Lions goal so far.