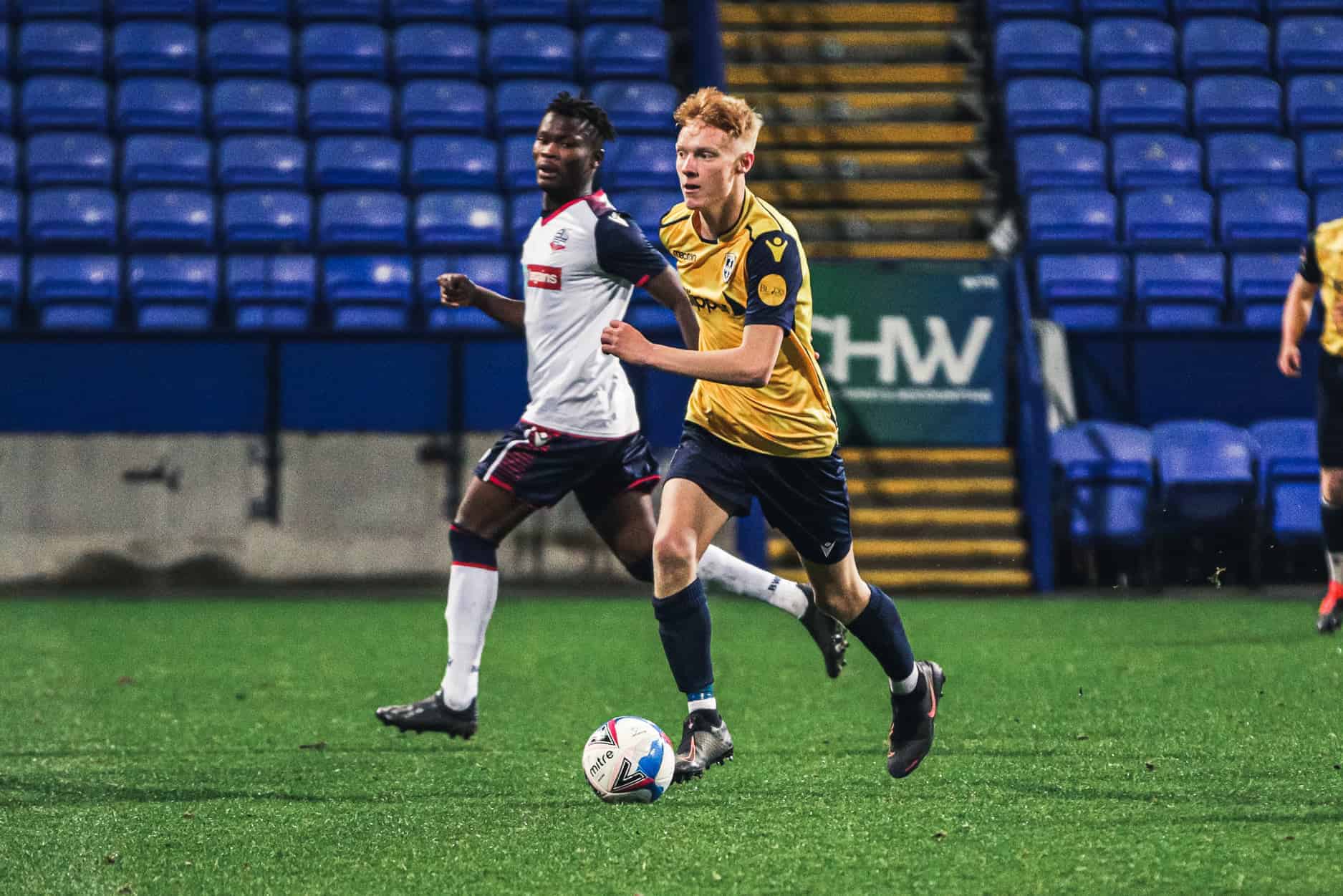 After joining Guiseley AFC’s Academy last season, on his release after 10 years with Bradford City, Lewis Hey is now making rapid strides in his football career.

This interview originally appeared in our matchday magazine, order yours for just £1.50 here.

In just a couple of months Eldwick lad Lewis, 17, has made his first team debut, been a key player in the Academy’s magnificent FA Youth Cup win over Bolton Wanderers and received the accolade of Player-of-the-Month from the National League Academy.

Former Bingley Beckfoot School pupil Lewis now undertakes his education at Benton Park School as part of Guiseley AFC’s full time Academy set up. He is studying for a B Tech in PE and an A Level.

Football however is currently the driving force in his life. Lewis says he is inspired by his dad, former Guiseley player Nick Hey.

Lewis said of firefighter Nick: “He gives me encouragement and always has done and he gives me loads of pointers. He has always been an inspiration to me. He has been with me all the way from when I started with Bingley Juniors and was snapped up by Bradford City at age six.”

Lewis joined Guiseley Academy last season after Academy Head Dave Currie has seen him playing for City and signed him up on his release.

Of joining The Lions the young midfielder said: “I had heard good things from a number of lads who were at City and had joined Guiseley. I knew from the lads that it was a friendly place and I immediately liked the environment.”

Last season was an injury hit one for Lewis but he said that Currie’s support of him never wavered. He added: “Dave is a legend. He always stuck by me when I was injured. He is a major part why us young lads are breaking through into the first team and he took us to that amazing win over Bolton in their own backyard. We were absolutely buzzing after that game.”

Lewis started the current season playing open age football with local club Ilkley Town as he sought to get fully fit after his injuries last season.

He did not expect such rapid promotion to the Guiseley first team despite being involved in pre-season training with the senior squad along with a handful of other Academy players. They were following Nathan Newall who got a first team contract the season before and Lewis feels that he, Newall and Adam Haw have kicked on to get a foothold in the first team camp, all having made starts in the Vanarama National League North this season.

Lewis said: “I did not expect to progress this far so quickly but it is up to me to keep on improving and repay the faith Marcus and Russ have shown in me.”

“I think that it has helped us youngsters that two or three of us have been in the first team squad together, we can bounce off each other. It is a whole new world to us, the physicality is at another level and we have to learn to deal with that.”

“The last few games have been really positive. The style Russ and Marcus have been focusing on is now coming to fruition. It is a great system to play and I am really enjoying it.”

Lewis spoke of how tough it has been for the players with so many games in such a short space of time saying: “A number of us have picked up little twinges and pulls as we pack the games in due to having missed a few weeks due to Covid outbreaks both in our club and our opponents. It has been a strange season but in one way it has been good for us young lads as it has given us opportunities.”

“It is a much more physical game than we are used to but we have been prepared by playing one v ones with the senior players in training. I was paired with Hamza in the first few sessions and he is a man mountain and I could not get the ball off him. The senior players have all been very supportive of us.”

Lewis has been impressed by the support from the Guiseley fans too, although the only ones he has seen due to Covid have been at Academy games.”

He said: “The fans have all been so supportive with all their messages on Twitter and Facebook and I cannot wait to play in front of them when they are allowed in to first team games.”

“Nathan told me what a great fan base it is and I can’t wait to play in front of them. Guiseley have been such a great club to me and I get such energy from the place.”

Lewis was recently presented with the National League Academy’s Player-of-the-Month award after his achievement in getting into the first team and in recognition of how he performed in the FA Youth Cup run, particularly in the win over Bolton Wanderers.”

He said: “I was delighted to get the National League award, it is a really good feeling to get it, it has been the highlight of my season so far.”