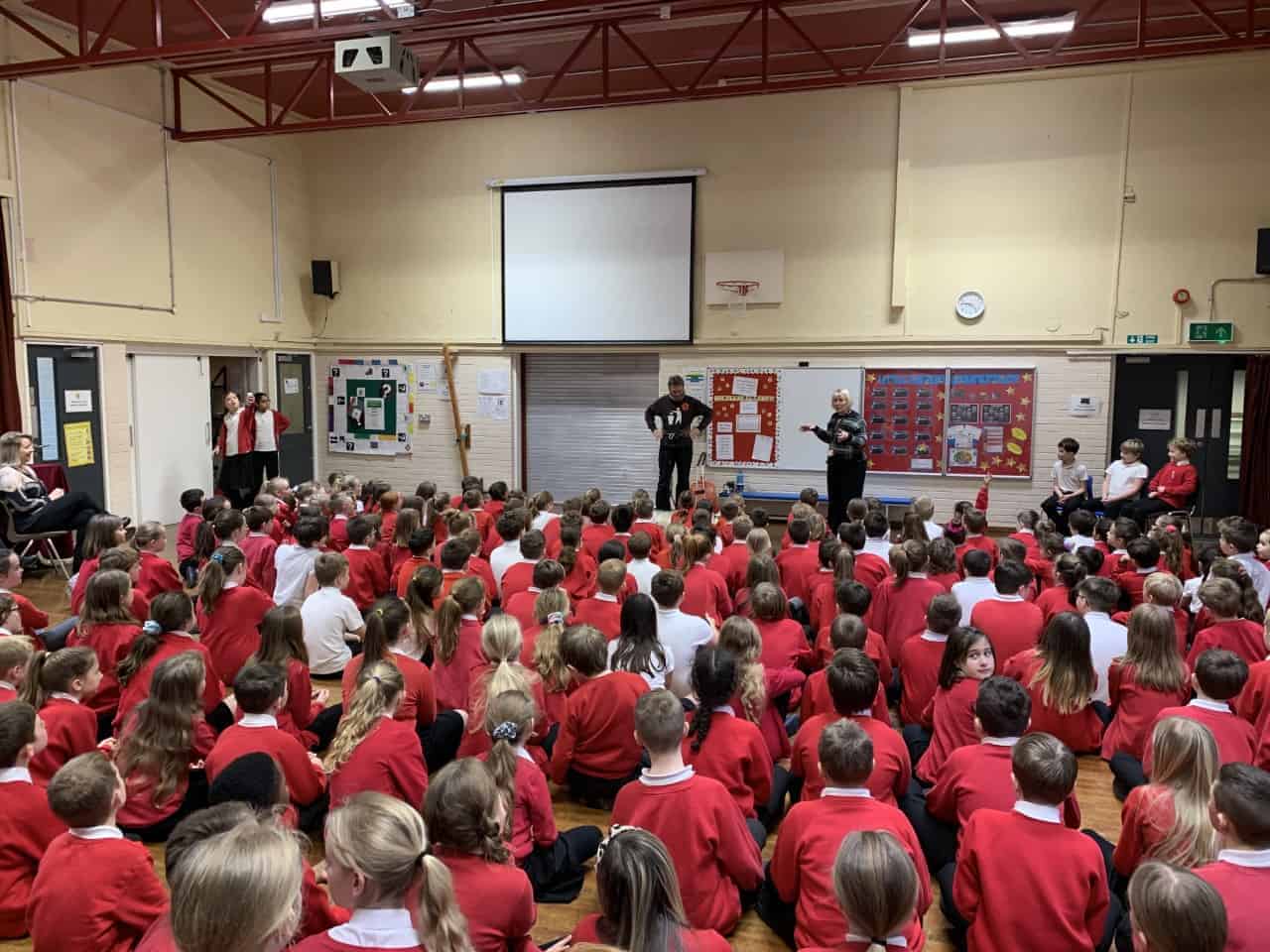 In an event organised by Guiseley Community Foundation Wayne and his dog Koda visited three local Aireborough Primary Schools to give a talk on plastics and their effect on the environment.

The three schools (Queensway, Yeadon Westfield and Guiseley Primary) are all those with which the Foundation work under the auspices of the Premier League Primary Stars project.

Wayne who had taken a Christmas break from his round Britain coastal litter picking walk travelled from his base near Darwen, Lancashire and stayed at the Chevin End Guest House in order to be on hand for a 9:15am start at Yeadon Westfield School.

His walk started on the 1st of February 2016, when Wayne and his dog Koda set off from the Lancashire coast to walk the whole coast of Britain and with breaks over the following 3 years he has now reached the Essex coast. Wayne is doing the walk in memory of his late father, the author, John L Dixon who suffered from Bipolar disorder for many years & he passed away in September 2012. Wayne had a tough time since his father’s passing but has now found himself in a position to achieve a lifelong ambition to walk the UK coastline. He is using the walk as a healing process and an opportunity to raise money and awareness for the charity Mind with the aim of improving services & peoples attitudes towards people who fall vulnerable within the community. Whilst walking Wayne is picking up litter and raising awareness of the environmental issues caused by single use plastic pollution. He believes our communities will benefit greatly if we pull together to create a clean and safe environment from the ground upwards.

The aim of his talk to the three schools was to inspire the young people who are already involved in environmental projects such as Queensway’s Eco Warrior after school club.

Wayne started by showing the children examples of litter that he had picked up locally and demonstrated the effect that this can have on wildlife. He then explained how Koda had picked up a serious leg injury from a discarded tin can that could have resulted in his dog losing it’s leg.

Wayne then went on to explain how litter and plastic can be transferred via the drains and so end up in the seas with its well publicised effect on marine life.

In terms of how the children could help avoid this he set out some simple rules:

2) Pick up litter and put in bins

4) Use your own water bottle rather than buy water in a plastic bottle.

Wayne was able to demonstrate his passion for the subject in a calm way that engaged with the children and their teachers and it obviously had the desired result with Queensway Primary tweeting:

Wow wow wow! What an inspirational pair Wayne and Koda are! We loved hearing about their incredible efforts to keep our coastline litter free. The children are feeling so inspired to get out and make a difference. Thanks @WayneKoda it was great to meet you. #keepbritaintidy pic.twitter.com/Mdk9yxEd0a

Yes. Thankyou. My granddaughter is at Queensway school. Sooo 1) She wants a husky! 2) She is insisting we go litter picking on the beach in January!

For further information and to support Wayne’s walk and charities please see his website here: http://www.wayneandkoda.co.uk