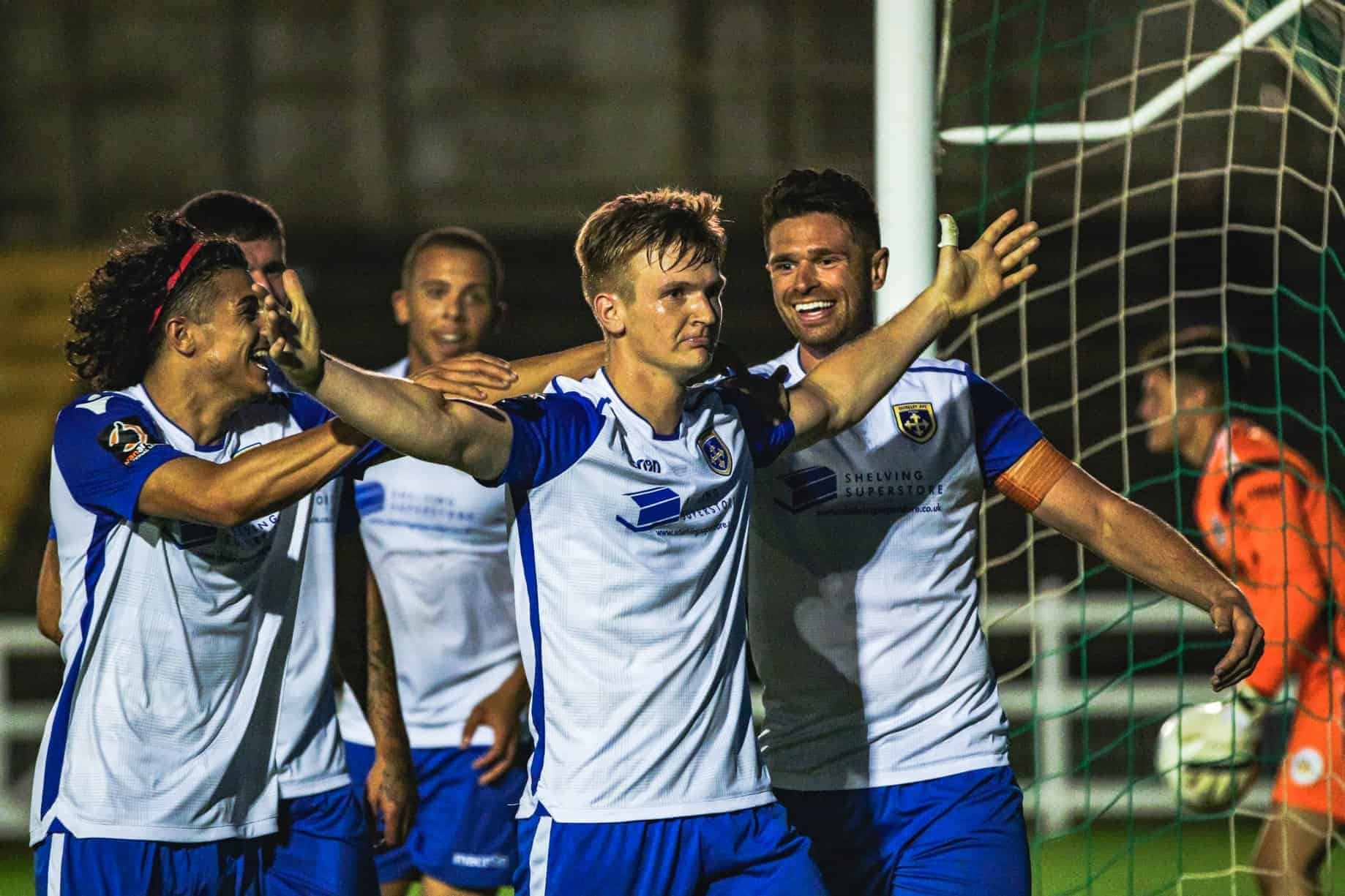 The Lions head into Marcus’ birthday week with a point behind them from the trip to Boston on Saturday, Bignot is hoping to take all three on Saturday with Alfreton Town the visitors to Nethermoor for the 3pm kick-off.

Tickets are available to purchase on the day at the turnstiles or online in advance here.

Billy Heath’s Alfreton have also had a strong start to the season and sit in eigth place going into this game, they have two wins, one draw and two defeats to their name having beat Bradford (Park Avenue) 4-0 on Saturday.

Former Lions Danny East and Shane Killock could line up for the Derbyshire based visitors on Saturday, both left B(PA) in the summer to join The Reds.

Bignot was delighted with the performance at Boston on Saturday, a game in which his side played 71 minutes with 10 men after George Cantrill was dismissed.

Chris Bell spoke to the Joint Manager after the game “It was a long but enjoyable afternoon, I think we have finished with half of the team being teenagers at the end which was pleasing. It is great exposure and experience for them, first and foremost it is a positive result and a performance.”

“In the second half we got the lead, we were confident at half-time of going out and getting the win, so there will be a slight feeling of disappointment that we couldn’t hold on to the three points but we have got to be happy with the point given the circumstances.”

On George’s sending off Marcus said “I don’t think George should have gone to ground, it was a no mans land area in front of the dugouts, we are a team who play with high instensity and are agressive when we want to win the ball. I don’t think he was out of control but we have to respect the referee’s decision and George will learn from that.”

“From a negative there are a lot of positives, you saw a group of players who really took on the mantle and stepped up.”

On Martin’s headed goal and seventh of the season Bignot said “Brad Nicholson has got wonderful delivery, there’s no one better at attacking crosses than Aaron Martin. I am delighted for him (Aaron) because he had to put a shift in today off the ball, he just typified what this group is about.”

On the penalty “George (Sykes-Kenworthy) said he never touched him but again I have got to respect the referee’s decision but I believe George! I thought there may have been a penalty a few minutes later so it evens itself out.”

Marcus however wanted to turn attention away from the referee “It wasn’t about the referee or his decisions today but it was a wonderful performance from a young group who had a decision go against them, they turned a negative into a massive positive.”

“We are trying to create an environment which is coach/management lead and player driven, we want the players to be the leaders and drive it. Today was a great learning curve for our young players and they took on the responsibility. For me it is not about how old you are it is about the experience you are getting and these youngsters are certainly getting that.”

Speaking about the game, his players and his birthday week Marcus added “I really want to enjoy the whole week and this has been a good start to it!”

“I said anything is possible with this group, I don’t want to put a ceiling on anything or an expectation, we have the opportunity to develop and grow. We love being where we are, it is nice to be second in the table, it is a young group that are going in the right direction and that can only be encouraging.”

Marcus also thanked the supporters who travelled to Boston on Saturday “Can I just say a massive thank you for all of the travelling supporters, yes we were down to ten men but it was even numbers because of the support and encouragement they gave. There is a lot of noise coming from our touchline but we were backed up today with the suppporters, it has been a good end to the week.”

The Lions are set to welcome Jamie Spencer back to the side as the midfielder returns from his suspension but will now be without George Cantrill following his red card on Saturday.