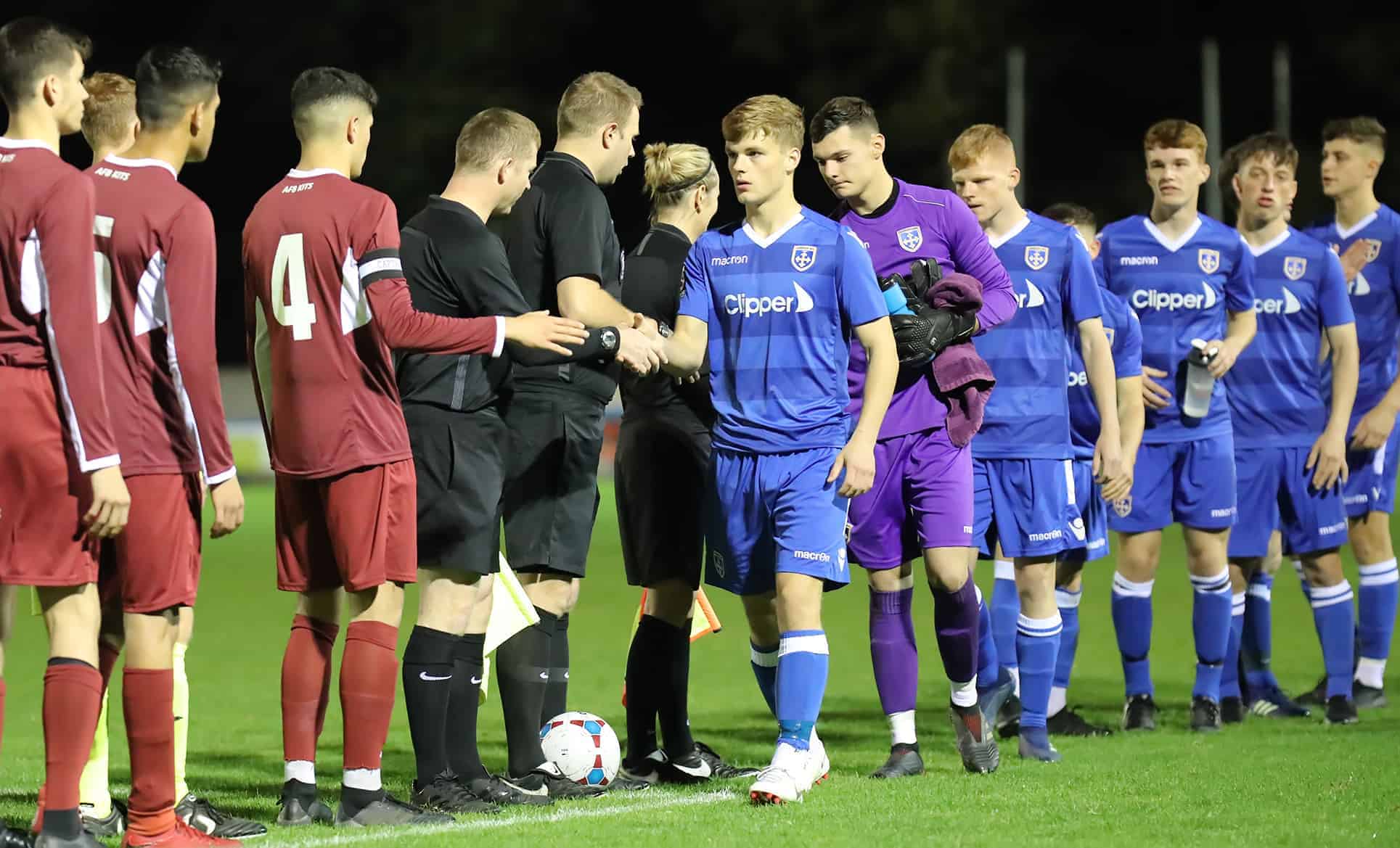 An injury hit Guiseley Academy side trailed 1-0 to Lee Elam’s Eccleshill United side ten minutes after the break in their game on the 3G at Trinity University, Horsforth, on a bright, sunny Wednesday morning in February.

Lacking the likes of Jack Lazenby, Joe Straker and in form striker Keiron Ceesay Guiseley were a bit lethargic and off the boil in the first half as strangely for a February day the sun blazed down.

Come the second-half with Lewis Waddington having replaced stand-in right-back Lewis Jackson, and changing to three at the back, Guiseley surprisingly went behind to a scruffy goal when the ball bounced back from a Declan Lambton save for Eccleshill to net.

Guiseley, however, started to settle into some kind of form, attacking well down the flanks through Nathan Newall and Tab Hussain on the left and Lewis Waddington and Adam Haw on the right.

Centre-back Nick Brayshaw was always willing to make runs from deep with Luke Hogg and Aleks Starcenko holding the midfield while Adam Haw and Charlie Heath did plenty of running.

Guiseley pressed on with Hussain, back to top form after his leg fracture, causing Eccleshill all kind of problems. He made an excellent run before crossing to Haw who set Rafael Marques up to fire home the winner.

On the back of a 2-1 home win over Eccleshill United, at Leeds Trinity University, Horsforth, Guiseley Academy maintained top spot in the National League Under-19 Alliance Division I with a 2-0 win at FC Halifax Town.

In the week that he made his first team debut midfielder Aleks Starcenko netted one of the goals and in-form striker Kieron Ceesay the other after a goalless first-half.

Guiseley Academy recorded their 14th win in 15 league games when they defeated Carlisle 4-1 on the 3G at Leeds Trinity University, Horsforth, on Wednesday, to maintain top spot in National League U-19 Alliance Division I.

A goal from Kieron Ceesay gave the Young Lions the lead in the opening minutes as he forced in a cross from Ben Darkins out on the right.

Carlisle had a chance but their No 9 hit his shot against the outside of the post with Declan Lambton out of his goal. Aleks Starcenko, who recently made his first team debut, was having a good game in midfield and he made it 2-0 with a good right foot shot following a corner.

Adam Haw then had a couple of attempts on goal but both went wide.

Carlisle were then awarded a free-kick on the edge of the box and fired the ball home through a crowd of players to make it 2-1. Guiseley went on to dominate the game and sealed the win with a fine header from Luke Waddington and a good finish by Haw to close it out at 4-1.