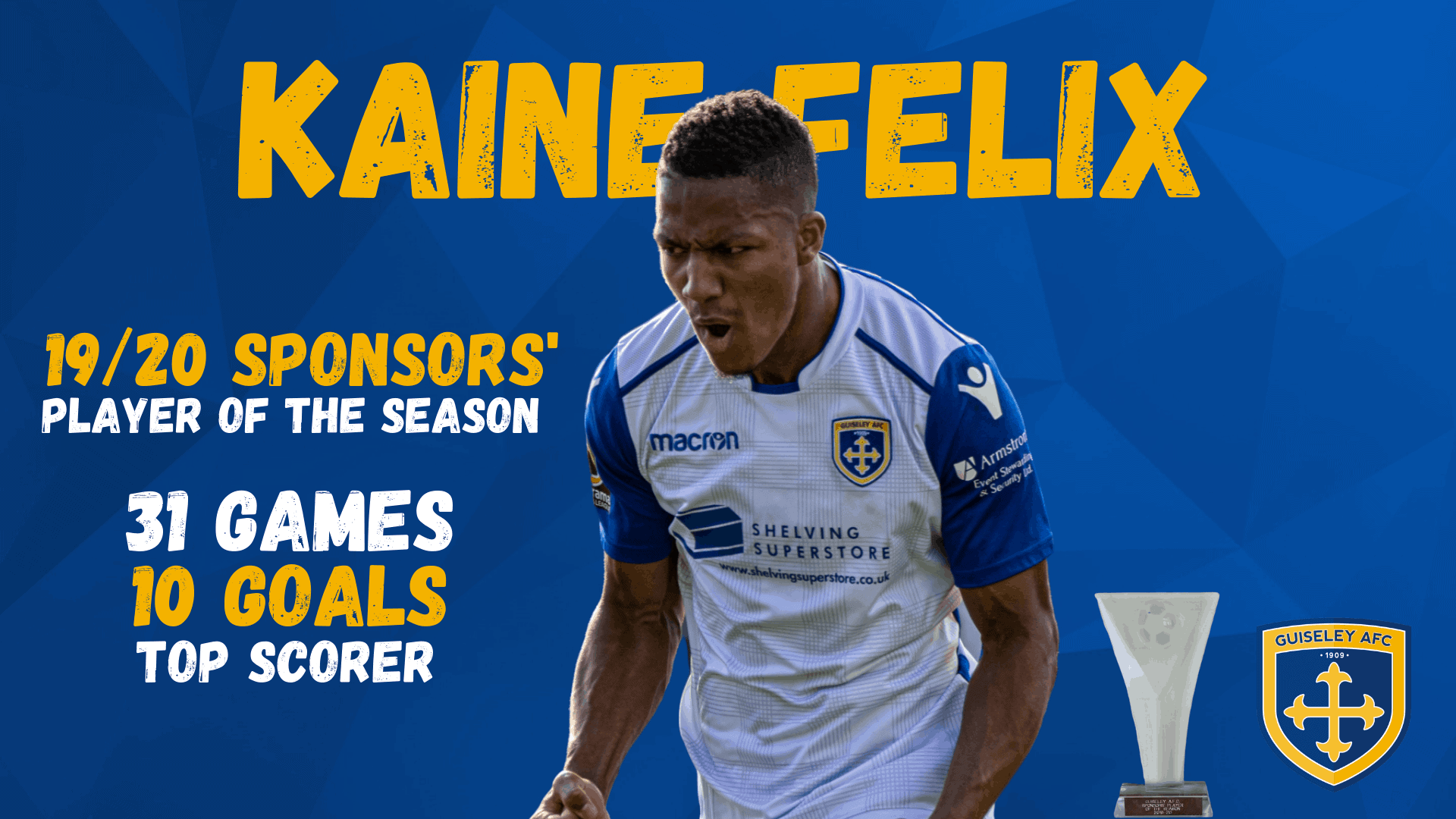 We are delighted to announce our 19/20 Sponsors’ Player of the Season is Kaine Felix as the winger collects a second award.

Kaine Felix impressed the sponsors watching on from the 1909 Suite this campaign and earned four Man of the Match votes after some impressive performances at Nethermoor.

The tricky winger has already jointly picked up the Craig Shearstone Guiseley AFC Supporters’ Club Player of the Season Award after he earned the vote of the supporters.

It is the second campaign on the bounce that the 25 year-old has collected the Sponsors’ Player of the Season Award after he was presented with it at Otley Golf Club last year.

We spoke to Kaine Felix to get his thoughts on his most memorable moments at Nethermoor this campaign “My favourite game at Nethermoor this season would have to be Gloucester for a number of reasons – we came from behind, I scored, we won, I got man of the match and it was my Mum’s birthday!”

“I would like to thank every single person who voted for me, it’s an honour to pick up this award 2 years in a row and I’m glad I’ve been able to make the fans and sponsors happy. I always give my all when I’m on the pitch and it makes me want to work even harder knowing that this is recognised by the sponsors and spectators.”

Club Chairman Gary Douglas was also keen to thank the sponsors of the club after they, once again, showed great support to the club after a tricky couple of years on the pitch.

“It is with immense pride that I pen this thank you to all our sponsors during these very difficult times. As we all know the 2019/20 season has now been concluded. It would have been a very interesting run in should we have avoided the Covid-19 pandemic. I firmly believe that we would have been there or thereabouts in the play off places and who knows, in those games anything can happen.”

“As I have often said Russ and Marcus did a fantastic job assembling a squad of youth and experience and if we can manage to keep the majority of the lads and add a little bit more we are surely in for very exciting times. I was made aware of your choice of Player of the Year and Kaine Felix is a great choice, he has had a great season.”

“None of this would have or will have happened without the great financial support we get from you our sponsors. Your generosity and enthusiasm for the club is very much appreciated by all of us here at Guiseley AFC. Together we can build a team that we can all be proud to watch and support.”

“Now more than ever can I ask you to keep supporting the club and if possible give a little more to help us through these very difficult times.”