Already down to the bare bones through injuries and suspensions Guiseley can consider themselves unlucky not to have taken all three points against Altrincham at Nethermoor this afternoon.

Having gone ahead early on through through Kaine Felix they then lost striker Lee Shaw to what looked like a bad shoulder injury and despite creating several chances they eventually had to settle for a draw after Josh Hancock had squared matters from the penalty spot midway through the second half.

Missing Aaron Martin and Brad Nicholson through suspension and Aram Soleman and Kenedy Digie through injury, Dylan Barkers and Andrai Jones were in the starting eleven while Academy defender Nathan Newall was on the bench.

The Lions got off to the best possible start after just five minutes when a wayward pass meant for Altrincham keeper Anthony Thompson went straight to Felix who cooly slotted the ball past the stranded keeper for the opener. 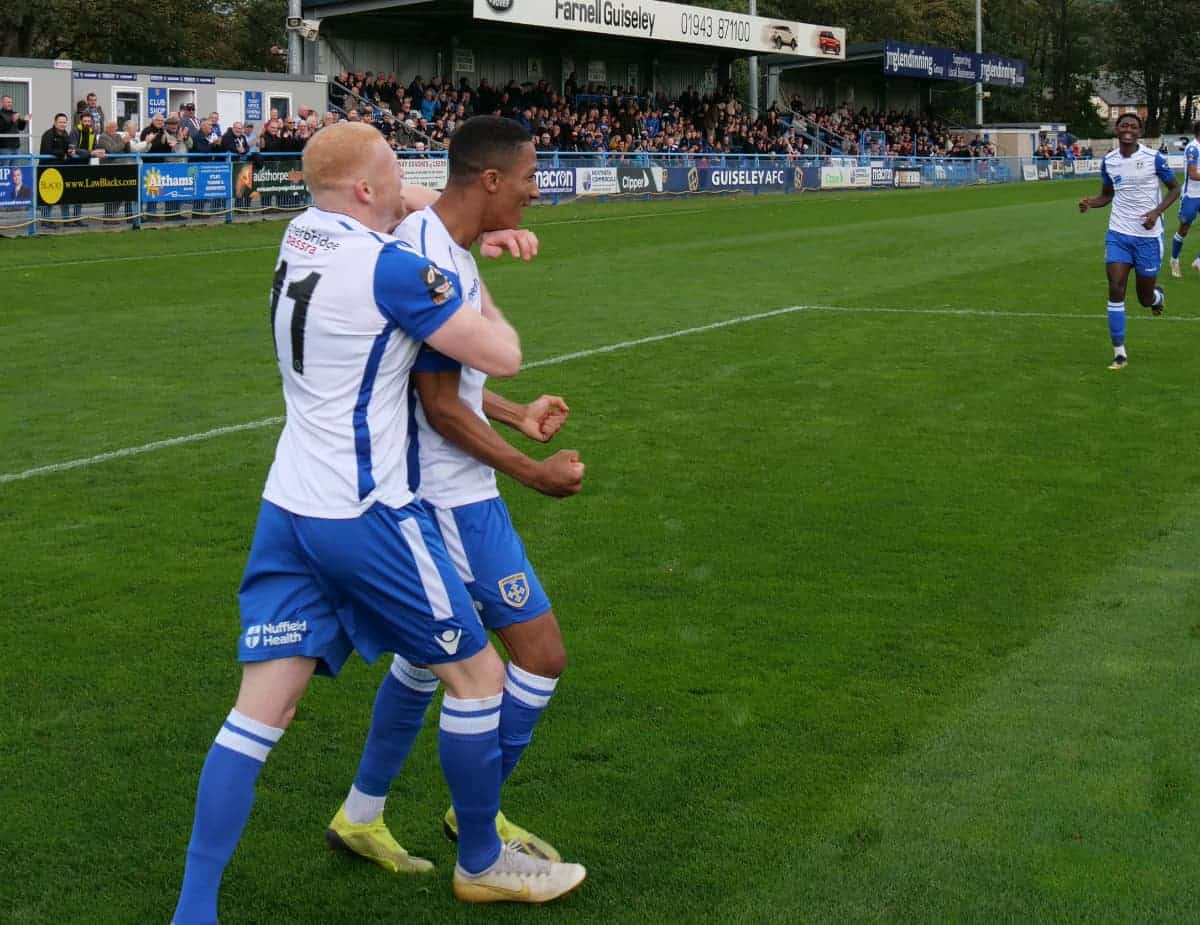 Playing some slick football the home sides rythm was cruelly interrupted when Shaw appeared to fall heavily and after a lengthy period of treatment from both physios he was carried off the field on a stretcher to be replaced by Aleks Starchencko on seventeen minutes. 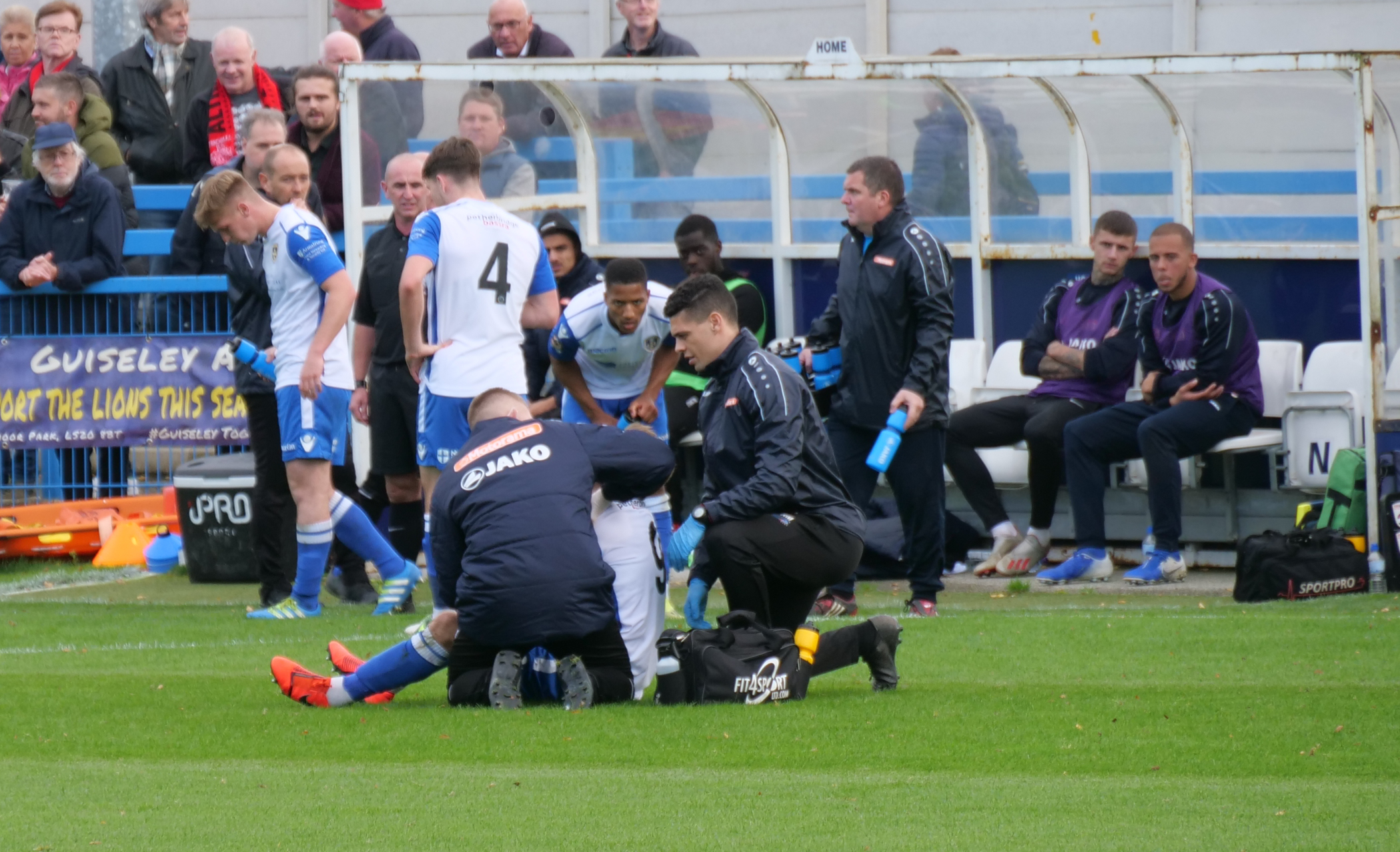 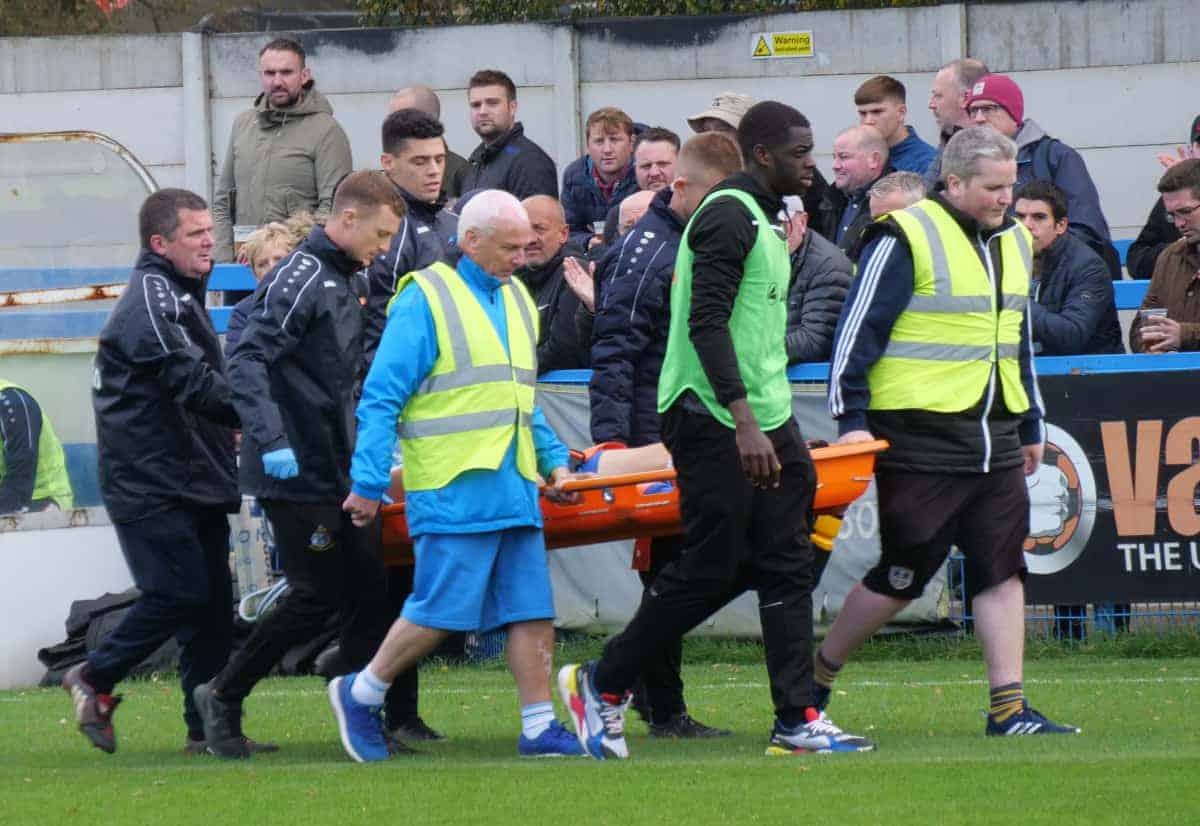 The loss proved pivotal to the Lions’ game plan which up to that point had seen Shaw, Johnson and Felix harrying the fragile looking Alty defence but with his loss they dropped back to defend with the intention of hitting the visitors on the counter.

As a result Alrincham had plenty of possession and got speedy wingers John Johnston and Ashley Hemmings down the flanks only for both of them to over hit their crosses which more often than not went harmlessley behind or found the far touchline for a home throw-in.

In their occasional forays into enemy territory the home side forced several corners and from one they nearly doubled their lead but captain Scott Garner’s powerful header came back of the bar with Thompson beaten and bounced to safety. 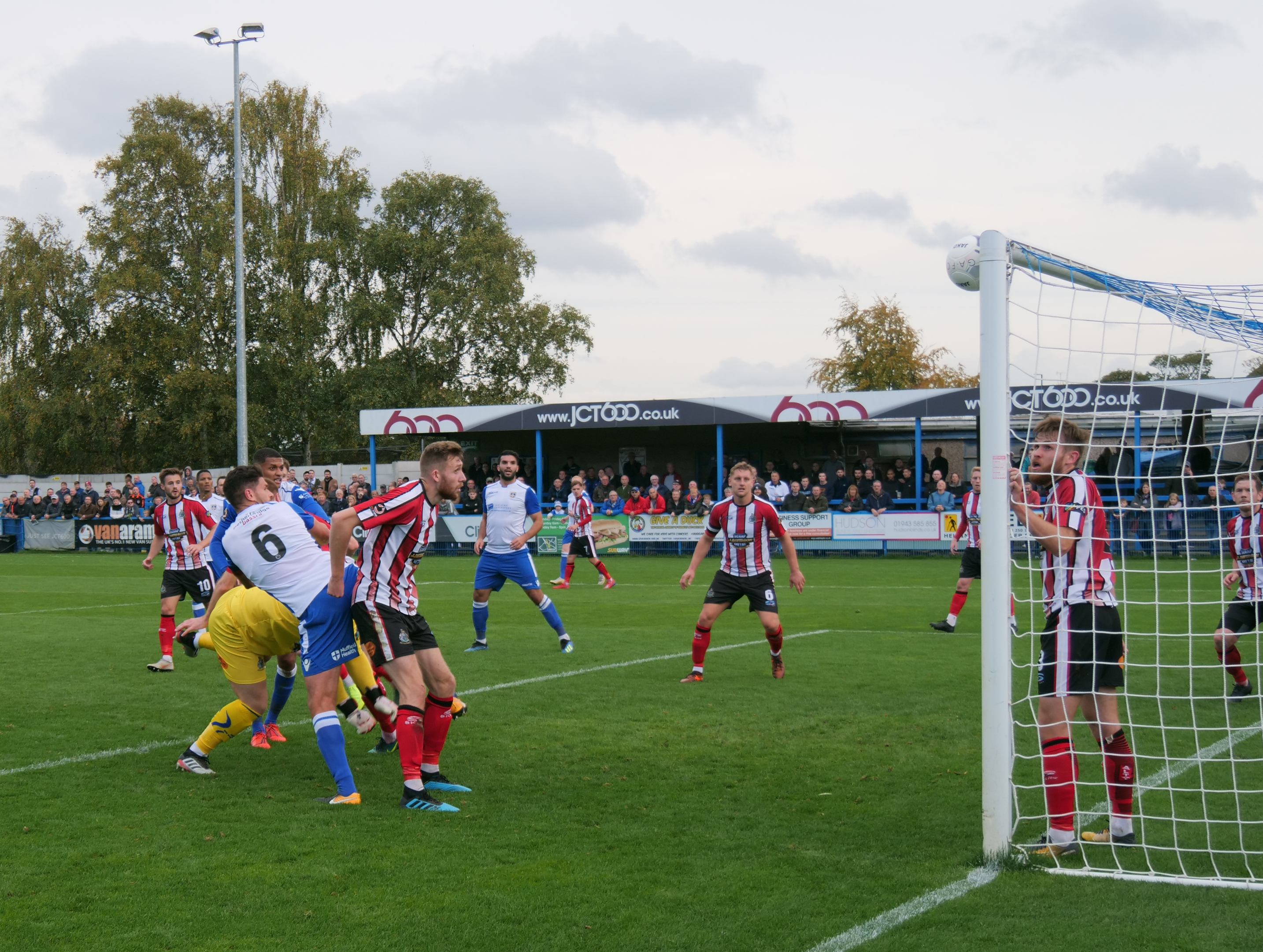 The Robins had the better of the early exchanges on the resumption but found the home defence in no mood to give anything away although at times it took a last ditch intervention to protect their lead. 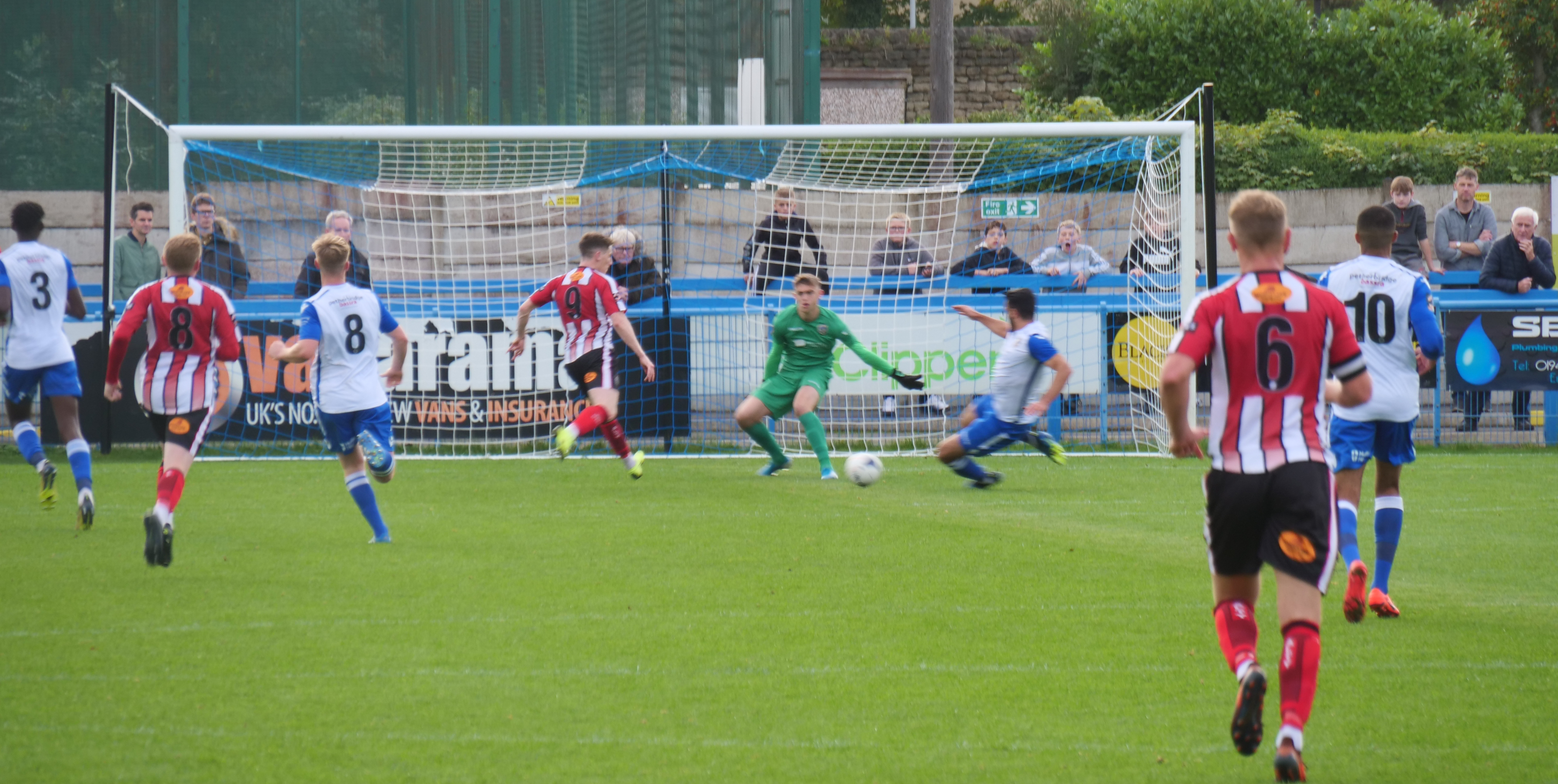 Guiseley should have put the game beyond Alty ten minutes into the second period when Felix, who proved to be a constant thorn in the visitors side,  did well to escape the attention of three defenders before putting the ball across the six yard box where Barkers at the far post managd to miss the target from three yards out. 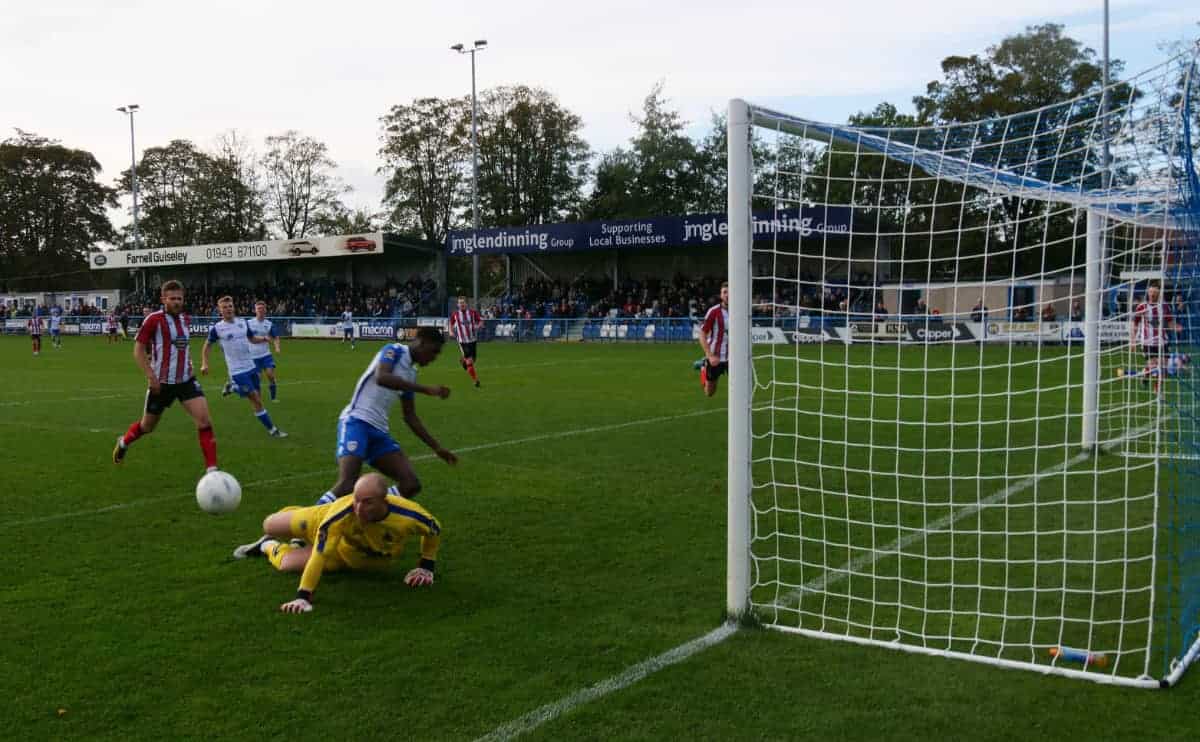 That resistance was eventually broken on 71 minutes courtesy of Starchenko’s mistimed challenge in the area giving Hancock the chance to send Marcus Dewhurst the wrong way from the spot.

Newall replaced Barkers shortly after and the Lions went on the offensive and forced several corners that produced a couple of half chances that the visitors managed to scramble away with Jamie Spencer’s header just over the bar being the nearest that the Lions came to grabbing the winner.