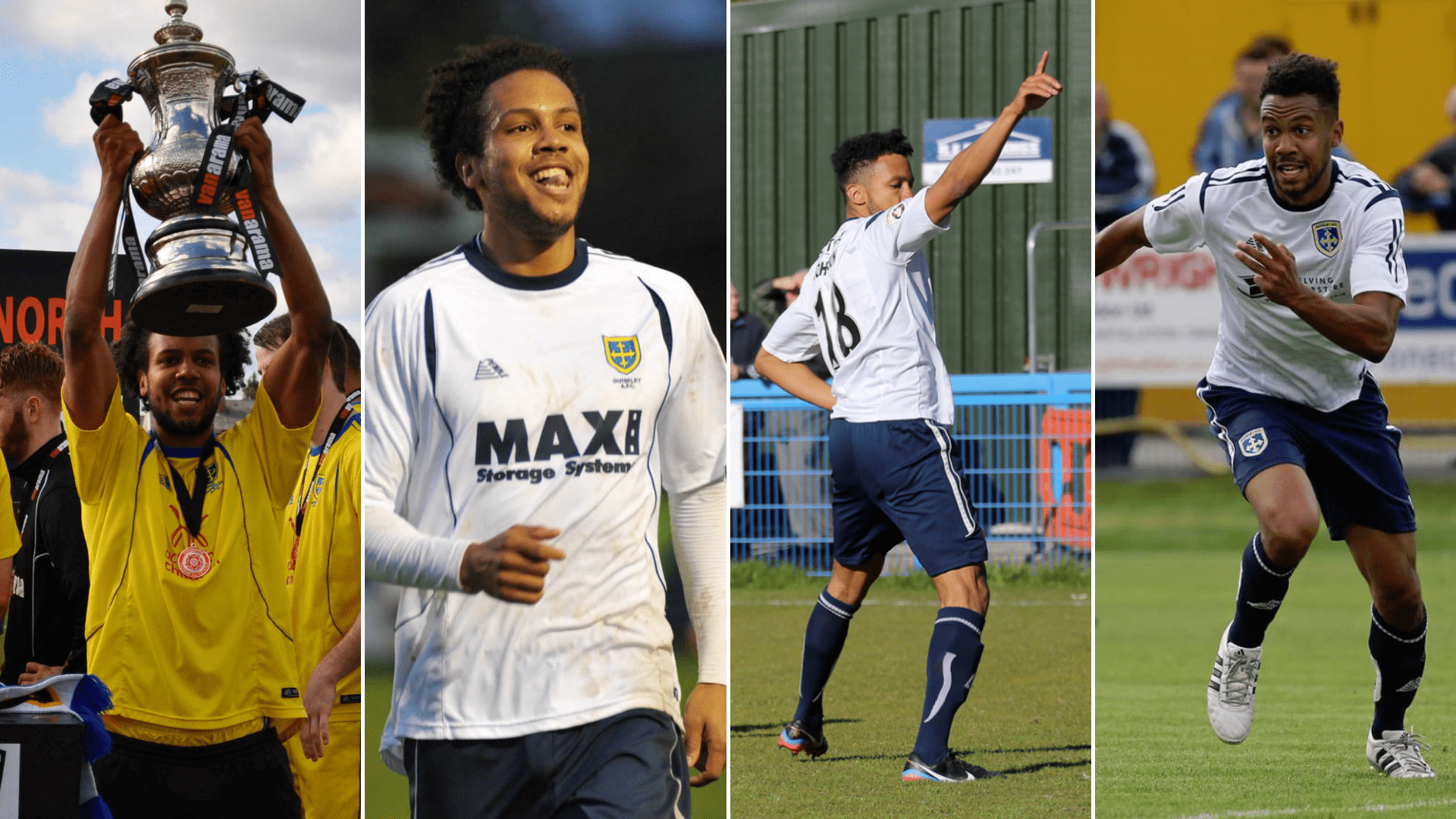 Oli Johnson spent four years at Nethermoor and Simon Bullock interviewed the skillful forward about his time here and where his career has gone since.

You can read the first part of Simon’s interview with Oli here. In the second half Oli discusses how the move to Guiseley came about and his time at the club.

Then you signed for Guiseley, was it the opportunity to get games, whilst playing locally that appealed to you?

I hadn’t really kicked a ball in anger for 18 months, just trying to get myself right and see if I could find a club. I was hoping to sign with a full-time club, but I quickly realised the issues I had with my body had gotten quite bad, to the point where I was physically not the same player in any way. I was friends with Michael Potts, who was at Guiseley at the time and I was in contact with Andy Holdsworth as well. He said to me, “Why don’t you come down to train and see how you are?” I was nearly at a stage where I could play again so I went to training and it was when Mark Bower had recently taken over. I got to the point where I was almost ready to play, but then I had to have operation before I signed. Once I’d had that surgery, I was offered a contract and that was the start of a relationship with Mark and Danny Boshell which has been quite successful.

Did you join Guiseley with the aim of working your way back into the EFL, or were you expecting to stay at the club/in semi-professional football for the long-term?

I was 26 and did have aspirations of getting back into the professional game but I think realistically, I just wasn’t the same player physically and didn’t have the same capabilities. I was constantly nursing soreness which was something I had to manage. Part-time football was about as good as I was going to get, but I knew that I was at a good club in Guiseley and obviously, it culminated in some really good times as well. I wouldn’t really change anything because my experience playing for Guiseley and since then, has shaped where my life and career has gone.

With 2014-15, what was that whole season like after coming so close to promotion the year prior, and then the chaos that was the play-off final against Chorley?

As it was every year with Guiseley, promotion was the aim, especially after going so close against Altrincham the year before. On a personal level, it was a very up and down season. Early on I struggled to find any form or fitness and couldn’t get into the team until around November when I got an opportunity to start and kept my place. From there, I stayed in the team and had a really successful period, doing really well in the league and then the old injuries reared their ugly head again. I was out for a couple of months with the same problems, always around my hip and groin. It was tough to deal with really, especially having got in the team and then having to deal with pain again, as well as having more injections, but I did manage to get myself fit to play again by the end of the season. We finished in the play-offs and convincingly beat AFC Fylde in the semi-finals and then the infamous play-off final at Chorley happened. Obviously, it will go down in history for Guiseley and it was just a pleasure to be a part of such a historic day for the club, and to do it with Mark, Danny and all the lads was great. I talk about ups and downs, I was ill the night before the play-off final and wasn’t in any fit state to start, but Liam Dickinson came on and did the business. They’re just great memories really, and ones that I treasure.

What led to you leaving Guiseley to join Bradford (Park Avenue), early in the 2016-17 season?

We had a bad start and unfortunately Mark got the sack. I think it just shows the fine margins in football because I remember the North Ferriby United game, we should have won and we’d lost by the odd goal in every game basically. Wrexham at home was another one, and it shows these margins because if it would have just gone the other way for us and we’d have started the season with a couple of wins, things might have been different. Obviously, it’s a results business and we didn’t get that, so Mark went and Adam Lockwood came in. I sound like a broken record, but I was having problems with my body again and I could never find any consistency with it. I had thought of packing it in at that point. It was just too much strain mentally and physically, but it ended with me not really being in the team and rightly so as well. Players came in and helped the club survive so I spoke to the club and asked if I could leave to join Mark at Bradford. My deal was a bit of a pay-as-you-play one, which affected my appearance fee as well, but I left on good terms with good memories. It was time for a fresh start, just to get going again with a consistent run of games. That was going to help me stay fit as well, so that’s how it ended at Guiseley but I couldn’t think of a better group of lads and staff to spend it with.

Overall, how would you sum up your time at Nethermoor?

Like I say, I left on good terms and had a successful time. It’s just a great club; behind the scenes, the fans and I look out for their results to the day. It was a really happy time with a few ups and downs, like anyone has at a football club. It’s the club that helped me get back on track. I was out of the game and I think without the patience and understanding of Mark, Danny and everyone at the club I would have really struggled to get back into the game, but Guiseley gave me that platform to resurrect my career so I’ll always have a little place in my heart for the club.

How has it been playing for BPA? From being in the play-offs to nearly getting relegated, as well as Mark Bower leaving and then re-joining soon after.

Similar to my time with Guiseley, it’s been really good for myself. There’s been lots of success like the play-offs and we put a good team together. There are a few ex-Guiseley lads so we’ve kept a good nucleus of players and personalities in the dressing room. Things did get crazy with different people coming into the club, budget related decisions and a few of us left. I had another injury, this time with my knee, so I had to have some time out of the game anyway, but by the time I came back, Mark and Danny had just returned to manage the club again. It was a bit of a struggle because there was so much upheaval and it was a case of getting the players back in who we thought would be good enough to take us forward again and move us up the table. Last season was null and voided and that saved us really, but this season we had a good squad of players and some young lads. Nicky Clee, who was at Guiseley, he’s still playing and is really key for us. We were looking in a lot better shape this season and hopefully we can take that into next season, but obviously it’s been a strange time for football recently. Maybe next season we’ll have a bit of normality back, fans in grounds and we can start enjoying football again.

What’s next for yourself? Do you have any ventures currently outside of football and is coaching something that would interest you?

As far as football is concerned, I just want to keep playing for as long as I can. I’m always learning how to manage my body and past issues. I’m playing for a management duo who I know, trust me and have that patience with me, so I can see myself playing for a few more years. Other than that, I’ve got my own personal training business and with an eye on the future, I’ll hopefully be starting an Open University degree in October in psychology. With PT’ing, the hours are quite anti-social and it’s not something I envision myself doing forever; it’s quite young person’s profession really. I’m just trying to add another string to my bow with something I’m interested in, so that’s where I’m at the minute.

Thank you to Oli for taking the time out for this interview.