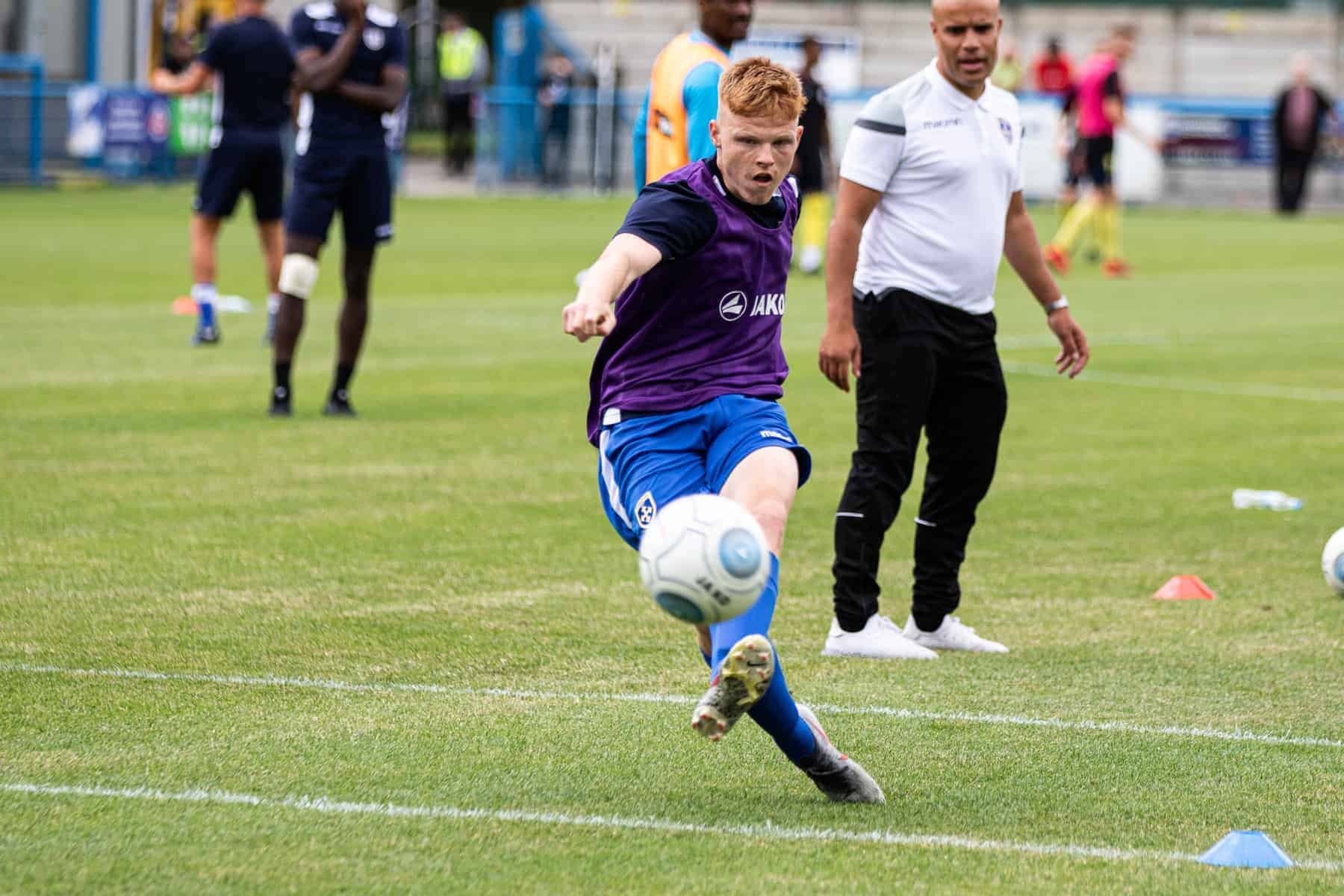 A thunderous shot from left-back Nathan Newall in the 78th minute sealed a 3-2 National League Football Academy North victory for a Guiseley side who were rather profligate in front of goal, writes Rachel O’Connor.

The win, in a game played at Harrogate Town’s ground due to work taking place on the Nethermoor pitch, took Guiseley back up to second place in the table after five games in the new ‘super league’, three points behind AFC Fylde.

Newall, the National League’s Young Player of the Month for October, after scoring four goals and making his first team debut, sealed the win with a superb strike after his first shot cannoned off an opponent, who was almost cut in half by the thunderbolt.

Newall picked up the rebound 20 yards out and his effort rocketed past a helpless Boston ‘keeper who had kept Guiseley at bay with a string of fine saves.

In this Under-19 league Guiseley put out a very young side, many being first years, and they handed a debut to 16-year-old Oli Brown who had a solid game in midfield.

Darwin King had an early chance for The Lions but shot over the bar as Guiseley dominated the early stages and should have made more of their chances. They paid the price when a mistake between ‘keeper Louis Simpson and a defender allowed Boston to take the lead in the 25th minute. This gave the visitors confidence and they had some pacey players who took advantage of some ponderous play by Guiseley.

Raf Ferreira, who netted seven against Boston in the away game, escaped his shackles to put Guiseley level in the 34th minute, lashing the ball home from 18 yards out.

Fox then wasted a fine cross from Newall by heading wide and Ferreira should have done better when trying to go it alone and firing into the side netting instead of crossing.

Haigie Demba replaced Simpson in goal at the start of the second-half and Boston fired a shot wide before Ferreira headed Guiseley in front in the 50th minute after a Jake Charles free-kick found an attacker who played Ferreira in.

Demba tipped a great Boston effort over the bar before Ferreira forced the ‘keeper into a good diving save. Good work by Nick Brayshaw found Newall out on the left and he put in another superb cross for Fox whose header was saved.

In the 66th minute Boston drew level when a crossfield ball was met at the far post.

Fox had yet another chance that was headed straight at the ‘keeper before Guiseley made their first substitution, Asa Lowe replacing King.

Another great shot from Newall stung the ‘keeper’s palms before Newall produced his match winner. Guiseley were again thwarted when the ‘keeper made a good save after a long range effort by right-back Jake Charles.

Guiseley then threw on their final two subs with Haroon Bostan and Ben Darkins replacing Nunes and Charles.

The Young Lions return to action on 20th November with a trip to Hartlepool United, kick-off at Blackhall Welfare Ground is at 2pm.