Lions Earn First League Away Win Of The Season At Chester 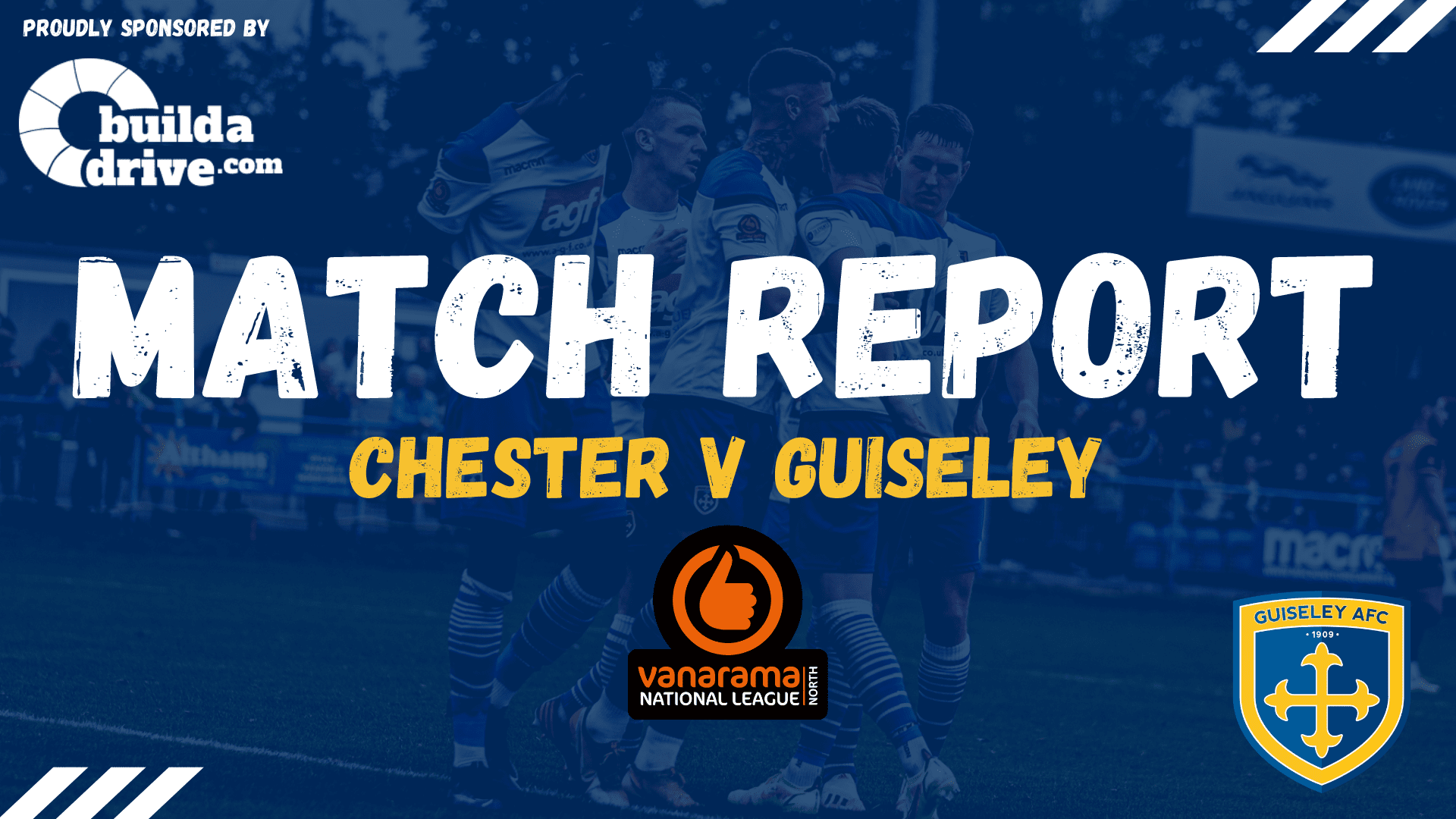 Lewis Hey’s second half strike in an open match earned The Lions a much needed three points on the road against Chester. Read more in our match report sponsored by BuildADrive.com.

Hey’s strike was The Lions’ first goal since the midfielder found the net back in October at Darlington, over 350 minutes of football has been played since then.

The game got off to a slow start with the first real chance falling to Jamie Spencer after 12 minutes but his low shot from 25 yards out was comfortably saved by Louis Gray.

Then the game suddenly came to life with good chances for both sides, the first fell to Hey who tried to lob Gray from a tight angle after being played in behind the home defence. From the resulting corner Jordan Thewlis had three bites at the cherry but couldn’t get a shot past Chester’s defenders who blocked all of his efforts.

A minute later Thewlis took the ball down well to start a Lions counter attack and played in George Cantrill but the number 2 got the ball stuck under his feet and the chance was gone.

Then Chester countered and looked to have scored one themselves but Brad Wade made an excellent stop at full stretch to deny George Glendon, the midfielder’s shot looked to be spinning into the bottom corner.

Three minutes later Thewlis had another chance to open the scoring after skipping past former Lion Dan Cowan but the striker’s shot from a narrow angle sailed over the bar.

The game settled down after a flurry of chances and it took until the 38th minute to really come to life again when Hey teed up Spencer but his shot went well wide of goal.

As the half was coming to a close the action was frantic, first Hey’s corner had Gray backpedaling but the keeper made a good stop and tipped the effort over.

The best openings of the half for both sides came in injury time, Glendon came so close to breaking the deadlock but his curled effort clipped the top of the bar with Wade stranded.

The final chances of the half though fell to The Lions, Prince Ekpolo, looking for his first Guiseley goal, looked to have notched but Gray once again made an excellent save to tip his effort wide. Then from the corner Spencer’s shot was heading in but a home defender made a crucial block.

Unlike the first 45 the second had a fast start with the visitors applying pressure to the home defence with a couple of corners but they dealt well with them both.

Chester were looking to spring a counter attack on The Lions and looked to have done it through Jack Redshaw. The former Morecambe man only had Wade to beat after controlling a long ball well but the Rochdale loanee saved the shot.

Thewlis thought he had the goal his and his side’s performance deserved with a calm finish after Brad Nicholson’s pinpoint pass, the Assistant Referee had his flag up and the goal was ruled out for offside.

Hamza Bencherif, back in the starting 11 after recovering from injury, was next to come close to scoring when his audacious volley from a corner went just over.

Thewlis was causing the Chester defence all sorts of problems and once again got a couple of shots away before the loose ball fell to Lebrun Mbeka who saw his curled shot go just over.

Chester took off former Lion Anthony Dudley and replaced him with Darren Stephenson, this added more presence to the home forward line but not before Hey tested Gray once more. Ekpolo found the winger with a good pass and his powerful drive from 20 yards out was flying in but once again Gray punched the danger away.

Chester came into the game a bit more after that and applied plenty of pressure on The Lions’ back line but they couldn’t find a way through.

It proved costly as in the 69th minute Hey struck well into the bottom corner to complete a Lions counter attack for third goal of the season. The winger was picked out perfectly and finished calmly leaving Gray stranded ending The Lions’ goal drought.

Hey nearly doubled his tally for the evening after a quick fire shot, Spencer found the number 9 who took a touch before curling a powerful effort towards Chester’s goal but once again Gray made a good save.

Not content with one goal Hey once more showed his skill turning his man superbly on the half way line, his cross found its way to Mbeka but Gray easily saved the shot from the edge of the box.

Hey, who could have had a bagful of goals, nearly struck again in the 80th minute but couldn’t beat Gray before Regan Hutchinson’s shot crashed into the side netting.

Chester were continuing to press and looked to have their equaliser after a shot from Redshaw was palmed into George Waring’s path who only had Wade to beat but the keeper recovered well to save the shot.

Jake Hull nearly scored his first Lions goal but his header sailed over, this coming just minutes after he made a goal saving block at the other end.

Lewis Hey was withdrawn after a late injury and fellow academy prospect Stones came on in his place with Shaun Tuton replacing Thewlis in injury time to see the game out.

An end to end match which saw plenty of chances was brought to a conclusion as The Lions took the ball down to the corner flags before clapping the ecstatic away support at the final whistle.