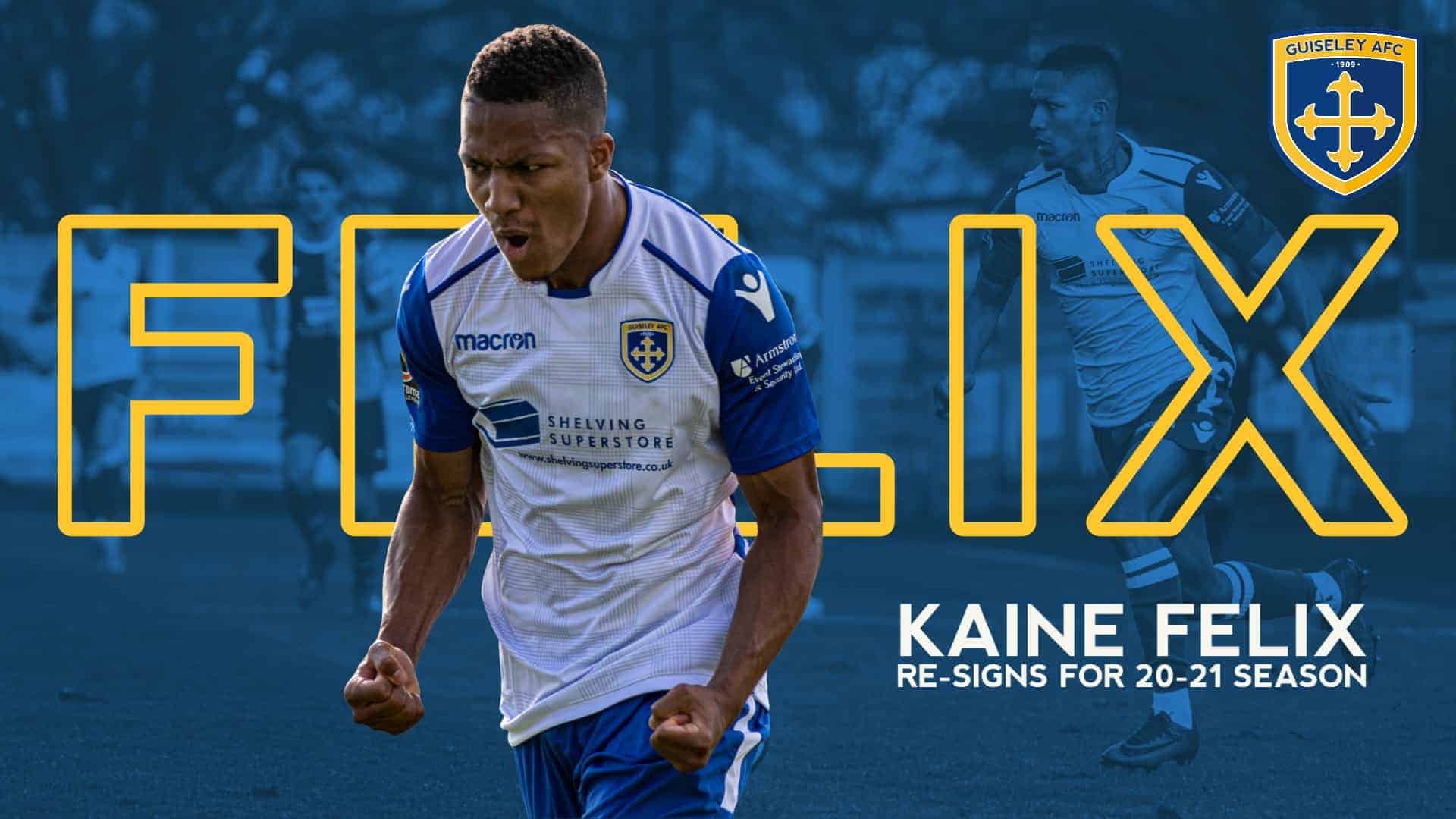 We are delighted to announce that Kaine Felix has signed a new contract with the club after picking up three end of season awards.

The forward played a key role in the campaign and really found his best form just before the season ended, scoring our final goal in a 1-0 away win to complete the double over champions King’s Lynn Town.

In one of the most memorable days of the campaign at York Felix struck the winning goal in the dying minutes at Bootham Crescent and it kick started a consistent run of form as Guiseley charged for a play-off place before the outbreak of Covid-19 brought an early end to the season.

Felix was happy to sign a new contract giving praise to Joint Managers Marcus Bignot and Russ O’Neill for the improvement in his play. Felix said: “This is hands down the best management team I have ever worked with. They make playing football fun and enjoyable but don’t miss out the serious element of when it’s time to work it’s time to work.”

“I have never before worked with someone so tactically advanced and equipped as Marcus. He is simply the Pep Guardiola of the National League. As for Russ he has helped me in so many ways on and off the field giving me the confidence to push on, always reinforcing the importance of working hard to get to your potential on and off the ball. Russ can turn an average player into a player a team can rely on week in week out. Between these two great managers I’ve played my best football of my career without a shadow of a doubt and I have enjoyed every minute of working with them.”

“We must not forget Paul Clayton either as he compliments them in everything they do. Paul has brought experience to my game and taught me how to focus when the tide is against you and he’s always been there as a big brother to talk to when my form is off.”

Russ O’Neill was happy to see Felix re-sign for The Lions saying: “Kaine has seen the benefits of a second season with us massively. When he first came to the club he was a bit flaky, if he had a couple of good touches early on he could have a real good performance but if his first couple of touches didn’t quite come off he would go into his shell and go missing. The transformation from that player to his last performance away at King’s Lynn is there for all to see, not just in spells but consistently all throughout the season.

“He changed position from winger to striker and ended up with ten goals but it is not only his goals that have impressed but his tireless work rate up front has really set the tone for us as a team. He was a thorn in the side of many a defender this past season and he scored some great individual goals that really he had no right to score. He is a totally different animal now.”

Felix started 26 of Guiseley’s 32 games last season being rested for the two West Riding County Cup games, and made five appearances from the subs’ bench.